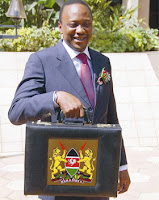 Kenya's Finance minister Uhuru Kenyatta has come under sharp criticism for what many people think are unsavoury public outbursts that are unbecoming, for a person aspiring to be a national leader. And to help in aggregating feedback on this issue, I've had the privilege of using Storify.

Simply put, the Storify application takes the social media experience to the next level, especially for a journalist or news organization. The functionalities are amazing, when it comes to covering an on-going story or aggregating feedback or reactions to a particular news story.

Getting the official invite and accompanying unlocking key could turn out to be a major turning point in my online journalism experience. And the Uhuru Kenyatta story provides an excellent way to showcase the power of Storify.

Posted by Albert Gachiri at 17:12 No comments:

It was a moving story on the plight of female casual laborers, contracted  to wash clothes in Nairobi households. These women are exposed to risks ranging from sexual assault, battery and the possibility doing harrowing tasks like washing dead bodies. But the same story was the subject of an apparent TV news plagiarism.

The first station to succinctly capture the emotional, physical and psychological trauma of these women, was K24, in its flagship human interest and investigative segment, 'Untold Story,' titled, 'Washed Away.'

The series, in my estimation, has all the hallmarks of a potentially award winning television story, even in international competitions. Why? Because of the simple fact that it is about real people facing real problems and having to deal with real consequences of their poverty-driven vulnerability.

However, the audience rating of K24 is nothing to right home about and chances are, this brilliant story perhaps never got to be viewed by a critical mass. And this is probably what another station, with a better viewership was banking on.

So, after seeing K24 story and being so moved especially by the episodes that had a woman, who was raped and infected with HIV and another, who was forced to wash a corpse, I see a very similar storyline, on this other channel, a couple of days later.

As a rule, a viewer wouldn't be interested in wanting to know details of who had the story first or whether many media houses were chasing the same story. But having already seen the story aired by another channel only makes one to be quick to conclude there is either a lack of originality or a blatant aping of story ideas, when the same story is belatedly aired elsewhere.

To me, this borders on plagiarism and as is the practice in academic circles, the noble thing to do would be to properly cite or professionally acknowledge the original source of a news or feature story. No one after all, has or should have a monopoly of ideas, especially in a news setting.

This way, the second station to pick up a story that has already aired, could find itself compelled not to repeat what is already in the public domain and instead strive to add fresh angles that drive the story forward and meaningfully add to the existing body of knowledge.

It does not matter, like in this case, if the same story of the woman washing a cadaver is picked up by a radio station. A way should still be found to make the necessary attributions. Newspapers after all, regularly cite specific television stations, if an article is based on something that has already aired.
Posted by Albert Gachiri at 09:48 9 comments:

Posted by Albert Gachiri at 13:44 No comments:

Kenya's Special Programmes minister Esther Murugi insists the media misrepresented her remarks about how Cuba went about locking up those who have contracted HIV. But the seeds of stigmatization have been re-planted, whether or not she appeared to have advocated for an isolation policy.

Her past instances of what some say amounts to reckless utterances notwithstanding, I'm still convinced Kenyan media did not quote Madam Murugi out of context.

She indeed went about talking about how Cuba's HIV/Aids policy entailed removing those infected with HIV from mainstream society and supposedly how this had kept infection rates at bay. Yes, it is true she said, 'I don't know whether we should be that drastic...'

But on being booed by fellow parliamentarians she was addressing, her seemingly cheeky and annoying refrain: '...but sometimes I think that is what we should do...,' is what nails her. The accompanying giggling is especially distasteful and clearly insensitive to the plight of those living with HIV.

I therefore find Madam Murugi's claims of being misquoted un-amusing and an insult to the intelligence of those who happened to have heard her or those with access to her disturbing remarks.

Unlike in the written word of the print media, where arguments of being quoted out of context can thrive, what is naturally captured audio/visually speaks for itself, unless the sequence is altered digitally.


So when Madam Murugi in the same speech continues to say that, '...Men should not have sex with men and... women I don't know about that....,' one can hardly be blamed for concluding she believes lesbianism is fine but homosexuality should not be tolerated.

Give us a break Special Programmes minister and for your so-called apology to resonate with Kenyans, especially those living with HIV, sincerity and remorse should be the key ingredients, not whether or not you were misquoted because either way, the great damage caused needs to be undone.
Posted by Albert Gachiri at 10:07 10 comments: