It's been more than a decade since data was formally invited to the high table of journalism, and thereafter, taking permanent residency in the form Data Journalism. Arguably, never before has the press given statistics such serious attention. The coronavirus pandemic has necessitated the need for journalists to master processing information couched in numbers. Correct interpretation remains a challenge though.

As depicted above, the same details can sometimes lead to different news stories among publishers, simply because editors can end up not putting the same emphasis on the pertinent angles in an issue.
Admittedly, this can be very confusing to the reader, on being confronted with what might appear as contradictory statement of facts.
On this particular day, this is what two of Kenya's leading dailies put out:

Should the reader believe car sales are decreasing or increasing?
The answer may lay in the context, if one digs further into the body of the articles.
But, there's no respite for that reader who only scans through the two article headlines.
It does become more worrisome, if journalists are unable to correctly interpret data, because it means they may also not be able to effectively interrogate figures shared by those in authority, in the public's interest.
Posted by Albert Gachiri at 21:24 No comments:

OF A NEWSPAPER ERROR AND ETERNAL HORROR

In live news broadcasts, things can go terribly wrong, even after meticulous planning. However, there's always a predetermined cause of action that can be set in motion, to save the situation. But a newspaper publisher can only watch in horror, as an error remains in view for like an eternity. 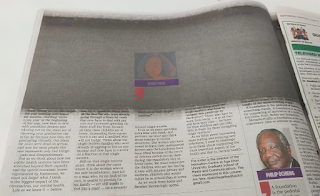 In the newspaper page above, what could have gone wrong?
The earliest some clarification could be made by the publisher is the following day, whilst the reader would probably desire a more immediate understanding of the actual reason behind this anomaly.
Poor print media...richness in ways to save face...when calamity strikes...is beyond reach! 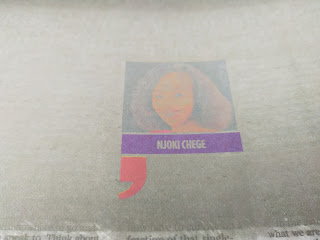 That's a luxury reserved for broadcasting, where editorial or technical challenges can be addressed almost instantaneously.
In a TV newscast, the director can take a commercial or go to a break, to buy time and reorganise, in the event that the program experiences challenges.
Actually, the viewer might not even notice there's something wrong, unless the screen goes blank for more than 3 seconds or so.
For online or digital news outlets, mistakes can be rectified as soon as they are spotted, and apologies published thereafter.
For print media, some editorial or technical errors, indeed, can seem like horrors frozen in time.
Posted by Albert Gachiri at 18:25 No comments:

Consumers of mainstream news products have greatly evolved. Their information intake does not just revolve around the output of established media channels. And that presents a major challenge to professionals trying to remain relevant in the news business, during the Covid-19 pandemic. For the top prize, good old news agenda setting remains priceless. 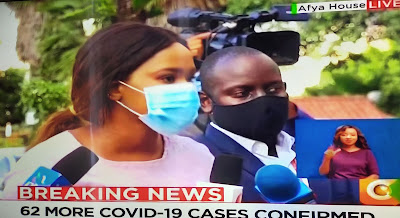 The coronavirus coverage in Kenya has involved a daily dose of what the country's health officials share, in terms of infections, recoveries and even deaths.

The shock value has since dissipated, and the audience hardly gets surprised by even new highs in the statistics, and their perceived significance can hardly be linked to a corresponding behavioural change.

News media managers therefore, have to re-examine how best to continue telling the Covid-19 stories in an impactful manner, that is both relevant and interesting.

Indeed, it would be foolhardy to send reporters to the government's press briefings, hoping they will come back with a good story, entirely based on what is said during the pressers.

Before leaving the newsroom, the reporters should already have their story, and attending the briefings should be an opportunity to enhance their predetermined content, or seek clarifications and official positions on the already identified issues.

In other words, the reality that press conferences are staged events should by now have firmly become self-evident.

- Don't send reporters to media briefings with questions to form the body of their story.

- Arm them with a story first, which will lead to probing questions.
Posted by Albert Gachiri at 11:25 No comments:

FROM LEGACY JOURNALISM TO A JOURNALIST'S LEGACY

To be a media practitioner is now hardly an attractive career option. The market is flooded with all manner of talent, both raw and refined. The unbridled storytelling passion of yore has given way to vain quests for fame and fortune. Legacy journalism is constantly being devalued, and not many a journalist is adding value to their legacy. 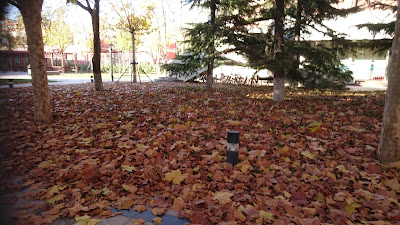 Indeed, media managers, pacesetters and trendsetters ought to re-examine the kind of legacy they are leaving behind, as they exit the stage, or approach the final bend in their illustrious careers.

- Did you allow others to thrive, or were you the one ensuring others don't survive?

- Were you among those taking the credit first, and feeling threatened by fast-rising talent?

- Or did you unselfishly push others to excel, and did not discredit their achievements?

- Will you be remembered for being a firm but fair boss, or will memories of you be laced with newsroom affairs, and failure to affirm professionalism?
- What kind of role model have you been, or do you believe you have no modelling role?

It's never too late to change your present, so that in future, your history will be honourable.


Posted by Albert Gachiri at 19:34 No comments:

We are currently living in very perilous times. The whole world appears to be confronted by a common enemy. And both local and international media have kept this story alive, adding to efforts to save lives, in light of the coronavirus pandemic.  It's refreshing to see TV news coverage incorporating a diverse pool of experts and commentators. The viewer expects balanced viewpoints.

In what seems like an eternity, the dominant opinion in TV news shows has been emanating from male voices, with token appearances of female representatives, every now and then.

An all women panel thus presents a powerful statement of the 'neglected' abilities, capacities and brilliance that reside in the female consciousness.

Indeed, male perceptions in any discourse are likely to only give us half the story, and it would need the input of women to complete the picture.

Which then raises another issue.

Is having an all female panel in TV news discussions equally a disservice to the viewer?

Will this also lead to a warped world-view?

The main aim, I guess, should be to have balanced views, irrespective of whether they are coming from male or female viewpoints.
Posted by Albert Gachiri at 11:46 No comments:

JOURNALISM: THE (IN)SANITY OF BECOMING ONE WITH THE STORY

You are likely to start your journalism career with high energy, driven by mighty winds of ambition. Confidently balancing between serving public interest, and servicing self-interests of growth and success. Telling the story of other people grows on you. And you become a well-known story-teller. Then you and the story become one. The insanity around you, makes you question your own sanity. 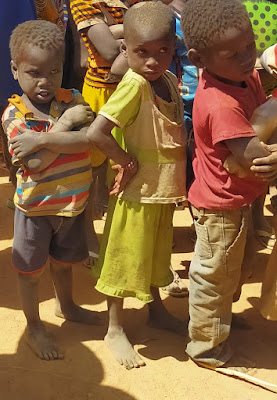 How is it that a people can be so brutally uprooted, pain written all over their faces, and your work is just to report their plight?

Indeed, it becomes very difficult to tear away from the realities confronting you. The contradictions in life become more alive.

How other people's dreams can uplift you. And their nightmares won't leave you.

As our TV crew went about filming and filing stories about the desperation in northern Burkina Faso, I kept reflecting on the failures of humanity.

Seeing, especially children being exposed to so much suffering, makes you question the very meaning of life.

The shock...the horror...the trauma! If that's how I felt, what words would sufficiently describe the agony of those directly affected?

In a way, telling such stories could be the only way to mobilise assistance.

For me as a journalist, sanity prevails if there's a good ending.

But insanity is no longer far away, if all I do is help to tell a never-ending sad story.


Posted by Albert Gachiri at 08:43 No comments:

THE DAY I MADE PRESIDENT MOI LAUGH

Kenya has been mourning the passing of the country's second president. Granted, the rule of the late Daniel arap Moi, was associated with a lot of political repression, brutality and suppressed civil liberties. Still, there are those who harbour memories of pleasant encounters. I cannot  forget the day I made the then president Moi laugh. 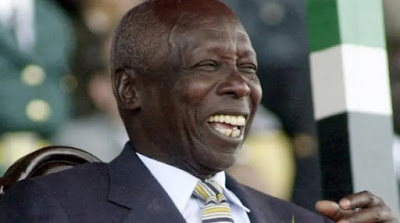 It was customary for educational institutions to be drafted into entertainment programs for the former Head of State.

Towards the end of my first university days, I happened to be part of a very  dynamic drama team, which specialised in delivering often unscripted,yet powerful, hilarious and poignant performances.

Such was the popularity of our group of 'legendary' thespians, that we easily landed an invite to perform for the president at his Kabarak home chapel, during one of the Christmas festivities.

Normally, it was the choir that would be chosen to belt out Christmas carols that were always a favourite with president Moi, but like I've said, it was hard to ignore the then thriving stage creatives.

Having us on board was obviously a big risk for our minders, but since the theme was going to be a Christian one,  there was some comfort that we wouldn't easily stray into dangerous territory.

And so for many evenings, we rehearsed the Christmas play, supervised by very senior university administrators,  including vice chancellors.

The 'notorious' drama team worked hard to perfect a skit based on an imaginary baby Jesus, being born in the streets of Nairobi, with all the attendant chaos of the late 1990s.

And on the day of the big performance, I was ready to deliver my role as a  tout for a public service mini-bus, popularly known as matatu in Kenya.

On spotting the couple cast as Joseph and a pregnant Mary, I loudly beckoned to them:

I then grabbed their luggage as I ushered them into the improvised matatu prop. It was no more than a group of students strategically standing/bending in such a way as to represent a vehicular contraption.

Once Joseph and Mary were in, I took their luggage to the rear end of the makeshift matatu, lifted the hands of two actors outwards, to simulate the opening of the boot or trunk, then placed the bags inside, then simultaneously brought the two outstretched hands downwards, to close the boot.

It was then that our eyes met.

The dreaded president Moi was laughing at something that I had done!

I froze and couldn't recall what I was to do or say next.

Luckily, my scene naturally blended into the encounter between Joseph, Mary and the innkeeper.

Such was the power that he wielded, that even managing to elicit a direct reaction from him...counts as a big achievement for me.

Please allow me to hold onto this memory, as Kenya lays to rest its longest-serving president.

Posted by Albert Gachiri at 02:43 No comments: