FOOTBALL MEANS BUSINESS, AFRICA: FROM CABINDA TO THE EMIRATES

One billion US dollars spent on magnificent stadia and other infrastructure. Unbelievable assembly of top-notch football superstars from Africa. Yet the crowds keep away. Not good for business. 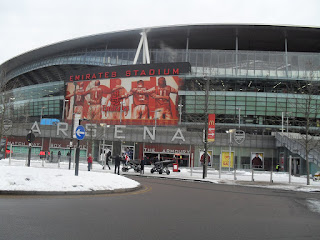 Under what can only be described as blizzard conditions, over 60,000 football fans troop to the Emirates Stadium for an English Premier League match in North London, on Saturday 9th January.

Supporters of the home team, Arsenal, brave the freezing conditions and families even bring along their little ones. Some fans do need some bit of Dutch courage and swarm into the nearby pubs before kick-off.

But it's not only Arsenal fans, who a keen to follow the action. Buses pull up on the Eastern wing of the Emirates, dropping in away supporters of Everton, who have endured the icy weather all the way from Merseyside in Liverpool.

Fast forward to Monday, 11th January and in the Africa Cup of Nations, Malawi cause a huge upset by blanking Algeria three goals without reply. The star-studded Ivory Coast team also finds the going unexpectedly hard against a determined Burkinabe side.

But the spanking new stadia in Angola are mostly empty. Not even the prospect of watching the likes of Chelsea's Didier Drogba, Salomon Kalou or Barcelona's Yaya Toure or his brother Kolo Toure of Man City and Emmanuel Eboue of Arsenal, could lure the fans to the stadium.

As I watch the Africa Cup of Nations matches, which are being beamed live to the UK by Eurosport, there are plenty of empty seats for my comfort.

Although the Luanda stadium was full to capacity, when the host nation opened the CAN 2010 in a thrilling match with Mali, I wonder aloud about the different scenarios in Europe and Africa. 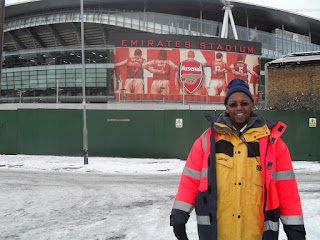 Back to the Emirates, It has become so cold I can no longer ascertain whether my toes are still there. But the pouring snow does not dampen the livid atmosphere inside the stadium. And even when Everton take a surprise early lead, the chanting by home supporters never dies out.

Arsenal eventually equalize and from the roaring cheers, I begin to worry about those residing in the nearby high-rise flats, given that the Emirates is build smack in the middle of a populated area.

And when Everton score a stunningly cheeky goal, despair among the home supporters begins to show. Deep into added time and some fans are already out in the streets, getting a head start to the tube station.

But as the walk away, many are still getting updates on their mobile phones and when there is another thunderous cheer from the stadium and some jump up and share the excitement of Arsenal's equalizer.

Football without the fans is barely a beautiful game. So why aren't Angolan or even travelling spectators keen on attending matches other than those involving their national team?

Is poverty the most obvious reason or is it a question of attitudes? Isn't Angola supposed to be riding on the wave of petro-dollars after UNITA guns went silent? Or, as pointed out by the online Daily Nation, attempting to stage high profile matches in Cabinda was ill-advised, following the Togo attack?

With the first World Cup on African soil only months away, this is the time to put tried and tested business models into practise and long after the global football fiesta. 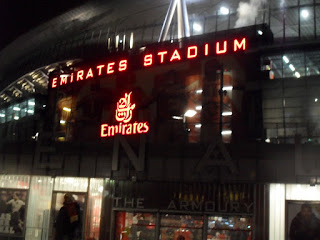 As I have now come to realise, the English Premier League is much much more than a game of football. After the game ends at the Emirates, many fans stream to what is curiously named as the, 'Armoury,' which has nothing to do with weapons but the latest Arsenal branded merchandise.

Indeed, as pointed out by my colleague Zalak Modi, after her visit to Anfield, Liverpool supporters are bombarded with T-shirts, mugs, scarves and other souvenirs, not just of the team generally but actually branded with the details of the match that has just ended.

Yes the economic conditions in Africa hardly leave one with disposable income after taking care of basic survival needs. But I am beginning to think that all we do is slave away in search of hard cash but hardly get to enjoy any of it.

We are so afraid for our well- being that the present is just occupied by trying to ensure we get a future life that is devoid of our past deprivations.
Posted by Albert Gachiri at 02:27