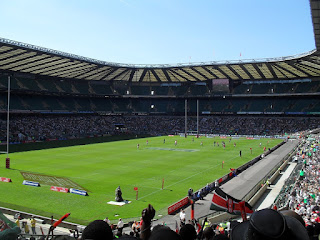 They came from all over the United Kingdom, European capitals and Africa. Right from the train stations in central London to the Twickenham Stadium in the South West, an unusually boisterous foreign legion of fans proudly announced its presence. The Kenyan rugby team was in town.

The UK capital was hosting another round of the IRB Sevens, which to many Kenyans in the Diaspora meant an unmissable opportunity to let free their patriotism spirit and also set into motion partying plans that had been planned a year or so in advance.

With temperatures soaring well above 20 degrees, it was also an opportunity for the ladies to unleash their outer beauty and let's just say there was a very thin line between casual sexy and extremely provocative, when it came to the day's attires. 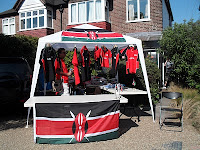 But the one dominant item of clothing was the T-shirt with colours of the Kenyan flag. So popular were the Kenyan team kit that one could easily think the event was being hosted in the East African country.

And those with a business acumen did not fail to grab this opportunity as well, with some setting up entire stands dealing with Kenyan merchandise.

Any Kenyan could also easily discern there was an usually high number of people conversing in Kiswahili, in it's many shades of manifestation. And the UK being a major market for tourists to Kenya, some of the locals heartily joined in occasionally, with their routine, 'Jambo, jambo bwana.'

Inside the 82,000 capacity seats Twickenham Stadium, the upper tiers were remarkably empty but on the lower stands, specifically in the South, things were drastically different. This happens to be the section reserved for Kenyan fans and they all flocked there. 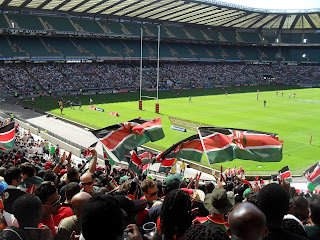 It was as if a powerful magnet was drawing the Kenyans together. It no longer mattered who was seating on whose seat and the match stewards had to give up trying to clear the aisles, which were swarming with Kenyan fans eager to cheer their team.

Other than the rugby matches, the Kenyan fans section was a spectacle to behold. So many Kenyan flags were flying about and the singing and chanting was a direct ticket to a nostalgic Kenyan wonderland. The  outpouring of the love for their country by the fans simply stood out and was really admirable.

It was a reunion of Kenyans abroad like I had never before witnessed before in my many travails across different countries in the world. This was spectacularly special and a firm indication that Kenyans are indeed proud of their country. 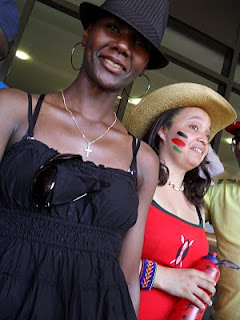 It perhaps didn't matter that the Kenyan team outclassed Portugal, or narrowly lost to Wales or even succumbed from a late rally by New Zealand that earned them a draw against the resilient Kenyan rugby sevens side.

All the Kenyan fans were true winners in my eyes. They won me over with their sense of togetherness in a foreign country. I call it the twin-win at Twickenham.
Posted by Albert Gachiri at 12:20

I not only am a huge Kenya fan but love the country or my birth. We were the ones who set up a stall to sell Kenya shirts and how right we were.
I want to thank the author of this article and his exceleent coverage of what was truly a wonderful spectacle and outpouring of love for ones roots!
Asante!

I am currently in China,anyone interested in kenyan rugby stuff at wholesale feel free kunishtua saa yoyote at wilkevtrade@yahoo.com ama by cellphone,008613868315792.