FROM JAMAICA WITH PROUD SHAME: DANCEHALL LESSON FOR KENYANS 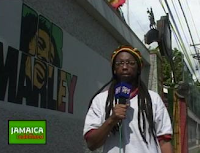 I've been to the Caribbean island of Jamaica, on a news feature assignment. Take it from me. The Jamaican dancehall music scene knows no shame. That daring lack of moral principles is what perhaps defines it. So what really did Kenyans expect to see, when a couple of Jamaican dancehall artists descended on the Nairobi entertainment scene?

Despite many of them having consciously or sub-consciously uttered the word 'Bendover' few it appeared, were prepared to see the daggering motions, heavily laden with raw sexual simulations, that have earned this breed of music notoriety.
It is however a tad ironic for the local media to castigate the organizers of this concert, as if they had just stumbled upon the goings-on in the Jamaican dancehall scene. After all, journalists had initially been denied entry into the event and had allegedly been told the show needed no coverage.
It therefore sounded ridiculous, when a variety show TV presenter in one of the local channels, introduced the Swaggeriffic concert story, by saying 80% of their footage was found to be unsuitable for screening.
Prior to the Easter show, the media should probably have tried to highlight the fact that some of these Jamaican music/dancing exports had been banned in a number of countries, including Jamaica.
And hopefully, a number of concerned organizations would have tried to petition the authorities to intervene to force the organizers to in turn compel the artists to tone down on their stage antics.
But a number of media outlets instead, actually promoted the concert. It is only afterwards, that the same media started crying foul over 'Bent Over Morals.'
Below is a sample of the outrage generated in the social media networks, in the wake of the Swaggeriffic concert.
Posted by Albert Gachiri at 16:22

Nice post. This is the real inspiration for any dancing star. I hope you will do well in your future in dance.