PREYING USING PRAYER: AWAY WITH QUESTIONABLE RELIGIOUS SHOWS ON TV

Who will save us from some of the dubious salvation being peddled on TV stations? Ironic, I think it is, for the Kenyan media to always be quick to expose fraudsters, tricksters or con artists and still accord a platform to religious shows that seem to perpetuate the very same sins. 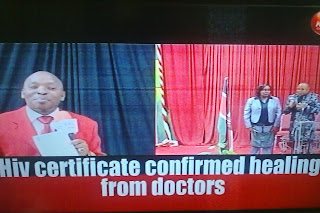 It's really amazing just how much of what is screened borders on outright hoodwinking of the audience, especially the gullible type, who need no concrete proof to believe in make-believe miracles.
Admittedly, it is hard to demand for evidence, when matters of faith are involved. But, and a big but, some performances in these spiritual extravaganzas come very close to stage-managed performances, even to the untrained eye.
It is more worrying that the media is being used by the televangelists, to coerce their congregation into parting with cash.
With the advent of mobile phone money transfer services, cell-phone numbers are some of the graphical details you are most likely going to see being prominently displayed in the church programmes, encouraging viewers to use them to help this or that religious cause. 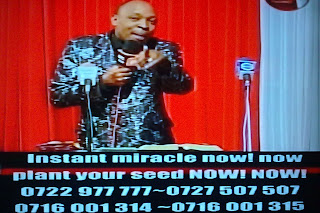 And if the supposed shepherd is the usual eloquent master of the spoken word, then his or her word is inter-laced with anything from threats of fire and brimstone to promises of instant redemption from whatever is afflicting the flock, to achieve the financial agenda, never mind what the actual Word says.
Therein lies my problem with the trend taken by nearly all the local TV stations, of allocating morning hours air-time on Sundays, to programmes with questionable religious content.
The way TV stations can refuse paid up advertisements from politicians spreading hatred or promoting hegemony, is the same way local channels should refuse to sell their airtime to creators of misleading religious programmes.
Posted by Albert Gachiri at 15:22

first let me congratulate you for penning this piece of article.i must admit local media has failed to expose them.what happened to the naming of the church look at the church names today and you wonder have said that i wish to help if need be to be used to investigate on this church`s why do they ask money for appointments for prayer and what is it with the Mafuta they sell.

true true true!!! and i hate to say this majority of this DOGS as Christ refers to them in the new testament will never ever see the kingdom of God because of these three evils;
1. the love for money wealth and self graftifaction.
2. the spread of wrong doctrines
3. the practice of falsehood

It is about a time someone regulated the men of cloth. Media is a powerful tool and is often mis-used by this lot. What is the difference between these churches and pyramid schemes or worse the latest gambling schemes that were recently stopped during the last holiday season.

Srry to say but a dont like the way Bs.Ndwati carries himself.God 4give if am rong

The media was very fast and quick in slamming out herbal medicine doctors whose work was genuine and result oriented-the same herbalists who gave media a lot of money. How is it that now they entertain such stunts whose work is to defraud gullible kenyans? Shame on you TV stations!!

Tell them Albert. Tell them. Instant riches do not come from the church but hard work. People are taking loans to 'plant the seed' and by the time they come to realise they have been conned by fraudsters masquarading as men of cloth, they are servicing loans or loosing their collateral to banks. Its time these 'healers' got unmasked and made to pay back every cent they have stolen from gullible 'faithful'.

Its the TV stations that are more cash hungry than the preachers. They are paid 4 airtime with the same money that they now purport is acquired corruptly. Do not judge the preachers but let God whom they serve (or pretend to serve) judge them. Who are you to judge another person's servant!

Very true church nowadays is a tax free biashara get rich quickly all at the expense of naive church folk.

As much as we would like to have a front seat in the KINGDOM after the judgment day, All happens by the transformation of an individual.....leave alone the drama and acts that bombard our morning every sunday from some preachers...they are kingdom seekers juz like me.I believe that only God can and will by HIS mercy allow us to dinner with HIM forever. let the media choose wich programme to broadcast by the value it adds to the lives of Kenyan