It would have been a great story. Celebrating another fine run by a Kenyan long distance athlete. All indications had showed Vivian Cheruiyot was going to be crowned the world's finest 2011 female athlete, and an article had been written in advance. But alas, the IAAF declared a different winner, just as the earlier story was about to appear in print. 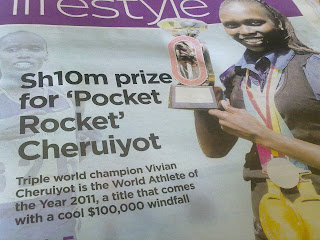 The result. Embarrassing, yet almost inevitable. The highest selling newspaper in Kenya hit the stands with two contradictory stories. One proclaimed Vivian's win and explaining in great details, her exploits in 2011and the elaborate award ceremony in Monaco. It was the centre pages' main attraction.

The other story, tucked in the sports pages at the back of the Sunday paper, had a totally different and more accurate account of what had transpired at the IAAF award ceremony. Vivian had been vanquished. 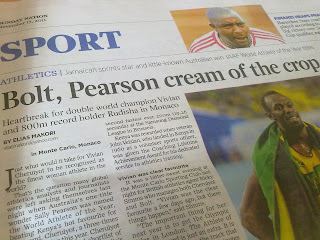 The honour of the best female athlete was bestowed on Australia's Sally Pearson, with Jamaica's sprint sensation Usain Bolt running away with the finest male athlete title.

So, it was almost practically impossible to completely change the content of the Sunday paper's Lifestyle magazine, carrying the erroneous story of Vivian winning the title, that was all set to appear just as Pearson was being declared the winner, on the preceding Saturday evening Kenyan time.

And the situation was made worse by the fact that both stories were written by the same person. 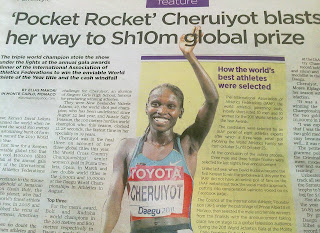 Should the popular paper have shelved the inside section in light of the latest development? As aforementioned, this was probably not practical.

Should it have withheld the new input to avoid contradicting the now misleading anticipatory article? No. otherwise it would have no business being in the news business.

But I strongly feel there should have either been an apology or explanation, even if as a footnote, somewhere in the Sunday paper, because that would have helped minimise the confusion to readers and speculation and castigation thereafter, especially on online social platforms.
Posted by Albert Gachiri at 16:32