CRITICISING THE CRITIC AND THE BEAUTY OF BALANCE

If you remember the lion story, (or the song about it), there's my side, your side and then the truth. Interrogating this truth is a key function of the media. And that is why a balance of opposing views is such a major pillar of journalism. So is Jeff Koinange on a political mission? 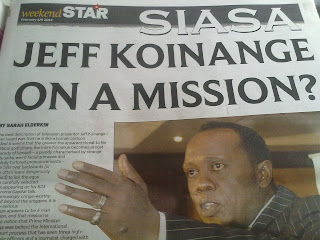 Well, according to seasoned journalist Sarah Elderkin, the host of K24's Capital Talk appears particularly 'hell-bent' on creating the impression that Prime Minster Raila Odinga had a hand in the International Criminal Court cases against Kenyans.

In a newspaper article, she asserts that Jeff is using his TV show to deliberately paint Raila in negative light, and even suggests the host could be manipulating his guests, in order to achieve his 'sinister objectives.'

Irrespective of who between Sarah and Jeff is on the wrong side of the truth or fairness, this in my opinion, is a very welcome discussion and quite refreshing.

I would love to see more critical analysis of TV programmes or even news bulletins in national newspapers, and similarly, incisive review of newspaper stories in the electronic media.

The way Sarah delves into the very details of Jeff's interview with Miguna Miguna for example, is outstandingly beautiful, whether she could be out to defend Raila's honour notwithstanding. 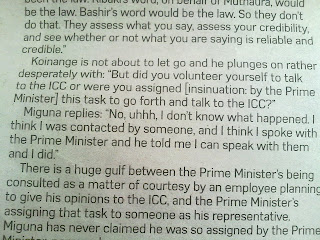 Narrowing down the focus to individual questions and their responses brings out possible undertones that probably were not so apparent, when viewing that particular episode on TV.

I would love to see Jeff Koinange inviting Sarah Elderkin on the bench, for a verbal sparring session, informed by whether or not Capital Talk has a hidden political agenda.

It is very true that Koinange is trying to make Raila be seen as the man behind the hague 4. But the biggest problem is that kenyans who are less informed will believe whatever it is that Jeff and the other fellows are putting into their brains. Kenya sometimes refuse deliberately to get the truth but rather take an issue from side. It is obvious that Jeff is using the K24 station to promote the agenda of his cousin Uhuru.