It's in the public interest, especially for Kenyans to realise just how low one of the country's renown female athlete has sunk. But in highlighting her plight, the media should not abandon ethical considerations like upholding her right to privacy, as an ailing person. The press should help Conjestina Achieng' get help but please, don't ridicule or make a mockery of her condition. 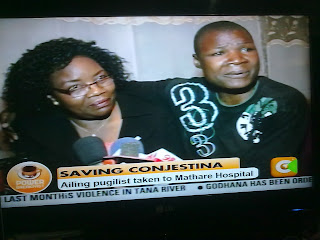 It was disturbing to watch one channel over-emphasise Conjestina's most recent case of mental instability, despite it having already been established, courtesy of another local TV channel.

Was it that necessary to air the 'extended' clips of the one time champion pugilist, primarily to showcase the fact that she's incoherent in her speech and actions?

Is this not being insensitive to the thousands of others afflicted by the same condition and debasing an already dire situation faced by Conjestina? The media should not add to the already heavy burden of those caring for or struggling to get support for mental health patients.

I honestly hope that journalists will back off and probably just concentrate on assisting Conjestina to get all the help that she requires, whilst safeguarding her inalienable rights as a human being.

And just like it one day dawned on the Kenyan media that it no longer served any useful purpose to give copious coverage to politician Stanley Matiba, after his health became an issue, Conjestina should now be allowed to recuperate with dignity and privacy.
Posted by Albert Gachiri at 12:18

It deplorable to gain mileage on someone's predicaments. Absurd!

Ida and company are there just for the politicla mileage. kwani no one cared to seek her when she was in dire need. shes been like this for a while. http://corporateseprofiles.com/2012/09/06/conjes-story-should-be-an-eye-opener/

debasing an already dire situation faced by Conjestina? The media should not add to the already heavy burden of those caring for or struggling to get support for mental health patients. Curtain Cleaners London