One million followers. The most engaged media brand on Twitter in the East African region. This particular feat had to be sounded off from the mountain top. But a little historical context of how it all began could offer intriguing insights. And such a success should be measured in terms of your own online real estate, not your brand piggyback riding on another popular platform. 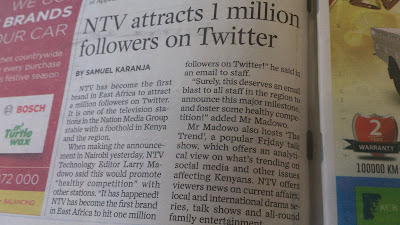 Fact is, five years ago, Twitter was a very neglected social media platform in this particular channel.

Actually, my main point when called upon to address the big editorial meetings, was the need for the newsroom staff to open Twitter accounts and especially how this would be useful in breaking news scenarios.

Okay. A disclaimer first. I was the pioneer Online Editor of the channel in question, (a disastrous one perhaps?).

Now that we have that out of the way, I would like to disassociate myself with any impression that I'm writing this out of bitterness, (the bile is just for emphasis).

Very strangely, there was resistance to officially use Twitter on air, from very high places.

I vividly recall the day I was on reporting duties, and I asked the video editor to put my Twitter handle, alongside my name, as he rendered my piece to camera.

In my excitement, I told the boss to watch my story on air, with the hope of being among the first TV journalist in Kenya to have a Twitter handle on air, and eventually turning this into a common practise in the newsroom.

But that was not to be. My then overall boss, in a rare panic mode, ordered me to remove my Twitter handle on the story (hardly five minutes prior to it going on air).

So I always marvel at the way Kenyan broadcasting stations and even mainstream print outlets, nowadays freely display Twitter handles of their institutions and even individual journalists. And there's plenty of hashtag this or that.

Why was this a difficult thing to do five years ago, and yet internationally, this had been an approved trend, even much earlier? Or it's just the usual fear of change? (Or was the problem me taking the credit?). 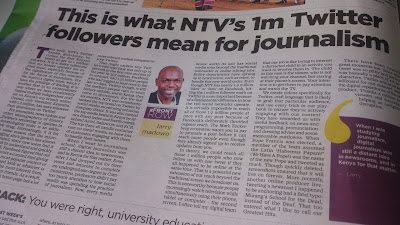 So now the same TV station feels very proud to have registered a supposed highest number of Twitter followers regionally.

This could as well be a fallacy, because all the accounts in this mega count are not verified. A single follower could be operating several Twitter accounts, using different handles.

But what I find most unusual, is the objective given to the channel's digital team, to get people away from their Internet-enabled mobile phones and directing their attention to the content airing on TV. 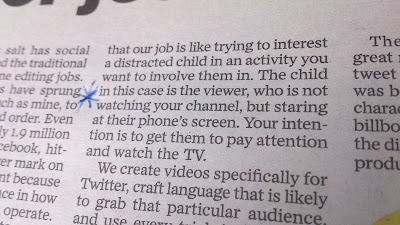 I'm of the opinion that the reverse should be the sequence of events: get those watching TV to go online for more related content or latest updates, especially given that most stories airing on local TV have already done the rounds on the Internet.

This mentality, partly explains why many Kenyan media outlets have found it hard to maintain truly dynamic websites, laden with compelling content to sustain the interest of their online communities.

In any case, isn't it a bit foolhardy for a media outlet to boast about how well its brand is doing on another external platform?

It's similar to boasting how one's rented house is magnificent, while at the same time identifying who the landlord is.

Again, your brand's worth as a media outlet on the Internet, should be measured from the performance of your very own online real estate!

It seems the futility and vanity of mainstream media riding on their external social media presence is still not apparent to everyone.

Behold! Wading through the social media wilderness can lead to the promised land of likes and followers.

But a day will come when it becomes apparent that the online audiences of these local mainstream media have been willingly delivered to global competitors.