SUB-EDITING KILLED UNTIL IT'S DEAD

A public editor of a Kenyan newspaper, recently posited that during a paper's production process, an innocuous lapse in concentration can result in a major editorial gaffe being published. The state of mind (and eyes) of the production crew is thus quite critical.  It is unbelieavable how some obvious errors get to see the light of day. Sub-editing can indeed be killed until it's dead. 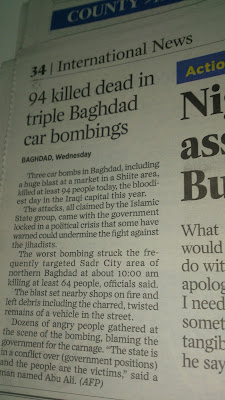 An article in the country's leading daily, has raised the bar in English use ingenuity, or is it stretching human comprehension?

The tragic story from Iraq speaks of a substantial number of people killed in a series of car bombs.

They sadly died and no amount of emphasis can augment our appreciation of this fact...that they are no longer alive.

But the headline writer insists on saying:

In other words, there is an implied possibility of people being killed, without necessarily dying!

May such sub-editing be killed until it's dead.

And may it rest in pieces!
Posted by Albert Gachiri at 16:53