WHERE PICTURES SPEAK LESS THAN A THOUSAND WORDS

International followers of the just concluded referendum in Kenya might have had one stereotypical perception reinforced, courtesy of a leading American media outlet.
Copyright: Washington Post 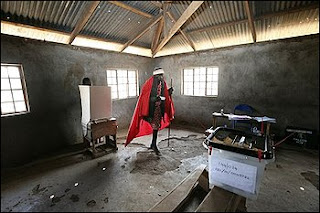 The majority of the pictures used by the Washington Post depicted members of the Maasai community casting their votes.

This is very much in line perhaps with what the world is used to see, whenever Kenya is mentioned.

Images of the Maasai's resplendent in their traditional regalia and cultural artefacts.

On the face of it, this might not look so wrong but keen observers may want to question whether such pictures are representative enough of the Kenyan people.

It predictably can be classified with the penchant of the international media to elect to use pictures of slums to amplify the poverty levels in Africa, even if the story could be about new found prosperity or economic progress.

Parallels can also be drawn with the customary visits to Nairobi's Kibera shanty dwellings, whenever foreign dignitaries go to Kenya, in the spirit of promoting 'slum tourism.'

And so whenever a Kenyan travels abroad, the bombardment with obnoxious questions, like whether wild animals mingle freely with people in the streets, inevitably has to be endured.

But on a positive note, as somebody wisely pointed out, the usage of the Maasai voting pictures is a befitting statement of the level of democracy and civic awareness prevalent in Kenya, even at the rural or grass-root level.
Posted by Albert Gachiri at 16:01