For how much longer should past colonisers continue to posses and profit from items seized from their former colonies? For eternity? This seems to be the view held by David Cameron, the British Prime minister.

According to a news report carried by BBC online, Cameron flatly refused calls for a prized diamond last worn by the late mother of Queen Elizabeth, to be returned to India, where it was mined.

And his cunning explanation apparently has more to do with the fear of opening up the way for other claims and less to do with a reluctance to admit any wrong-doing.

"If you say yes to one you suddenly find the British Museum would be empty..."

In essence, what the British Prime minister is saying is that his country knows too well that apart from the Koh-i-Noor diamond, there are other ill-gotten treasures, historical sculptures and ancient artifacts donning the many impressive museums scattered across the UK. 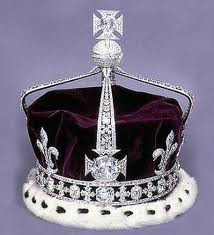 And many such institutions charge entrance fees, meaning the museums are deriving commercial value from possibly 'stolen treasures.' Isn't that supposed to be illegal?

Perhaps time is nigh for international laws to be drafted to compel countries like Britain to return what rightfully belongs to other nations, having had the misfortune of being colonised by plunderers.

If the BBC is truly not a government mouthpiece, it should perhaps have closely interrogated Cameron's remarks about the famous diamond, which has been part of the Crown Jewels for more than a century.

But trust them to prominently and extensively quote a historian, who questions the validity of India's quest to have the Koi-i-Noor returned to its rightful owners.
Posted by Albert Gachiri at 11:05

Museums in Britain do not charge entrance fees. The British Museum in London, while truly adorning a wealth of stolen treasures, is free for all. The Crown Jewels on the hand, where the Koh-i-Noor is housed (in the Imperial Crown of India) is in the Tower of London, not museum, and that charges entrance fees. Otherwise true about the need to return to the world what is not Britain's to keep.

Agreeably, the museums might not charge fees directly. But their prestige is uplifted and this partly sustains the interest of paying tourists sampling the UK in general. The stolen treasures on display are unfairly being used to promote Britain as a destination as opposed to where they originally came from. In other words, you don't have to go to Egypt to see the mummies, the same can be viewed in London, free of charge!!