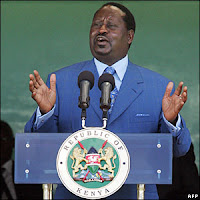 What exactly constitutes hate speech in Kenya? Whereas Kenya's
Finance minister Uhuru Kenyatta has been roundly criticized for his outbursts, especially after they were given prominence in the mainstream media, the same cannot be said of public pronouncements by Prime minister Raila Odinga.

Much as Raila's remarks probably fall under the same realm of abusive and potentially divisive utterances, they somehow didn't seem to interest the local media, as much as Uhuru's coarse comments.

Again, using the power of Storify to aggregate some of the reactions about the Prime minister's speeches, it nevertheless emerges there are those, who feel Raila too, has on a number of occasions been out of line.

Email ThisBlogThis!Share to TwitterShare to FacebookShare to Pinterest
Labels: Storify

I dont see anything wrong with Railas staetment at all, he merely described what others are hope based on his knowledge of them,but Gachiri look for better things to adress-like people dying of Hunger,lacking water,those who lack school fees,hosipital bills or workers suffering under inhuman working terms emerging sicknesses and corruption. this debate on people who dont care about lives of Kenyans isnt helpfull to us,please

i really do not see what he said as hate speech as he did not say there are drunkk tribes..he only mentioned individuals..uhuru however targeted luos and other uncircumcised tribes..so leave raila alone ..

RAILA IS CALLING PPLE WEZI WHAT ABOUT KISUMU MOLASES MAIZE HE SHOULD NOT TAKE KENYANS FOR GRANTED .HE CANT ESCAPE JUSTICE BUT HE CAN DELAY IT

Surely .... action shud be taken on all inciters coz y use that kind of language in public bt dear Kenyans lets remain United coz politics is a dirty game let them play it bt dont get uaself involved .Peace is all wat we want rem we are 1 Kenya ! 1 people!

But you people why do see only one side of the coin. Just open your eyes wider please

sambady pliz tell me why it IS HATE speech by Raila when he says "watu wengine wanaamka asubuhi kuvuta bangi, na wengine ni wezi na kila siku wako court...", but is it is NOT HATE speech when Uhuru goes on vernacular radio and calls Raila a "kimundu giki", asks at a rally if Raila thinks the Hague belongs to his mother, and asks if Raila thinks Kibaki is as uncircumcised as he is. Then still NOT HATE speech when at a rally Ruto says Raila n i"mwenda wazimu"?

Two wrongs don't make a right! All I can say is that all are equally guilty ... and we are saying to them that this can not happen here in Kenya! Na kama ni madawa na wizi! Kama si kweli basi tunasema Kenya hamna wizi na pwani hamna mihadarati!

analyze this with sober mind. if Uhuru said something wrong it does not justify Raila to do the same. they are all wrong in using abusive language.

It is such unfortunate that a leader of Hon. Raila's calibre; a Pan Africanist has brought himself too low, to the level of those class of politicians who endlessly engage in murky, dirty, petty, personality based and tribal politics. Of late he often lacks a reconciliatory tone when addressing delicate matters that may potentially derail the Unity of Kenyans. He has over-exhaustively used the KKK thing over and over, in my opinion to the extent that it may cause the isolation of these three Tribes. I urge Kenyans to be above fray and let politicians do their politicking!

if there is anyone in kenya who is an hypocrite then is Raila. he is quick to judge others without good reason just because they are his opponents in politics. let him leave them alone 'n unite with others if kkks are not kenyans as he claims but he also make sure that they are not going to vote come 2012 coz they will make him not see the presidency

This is not the first time Raila is getting away with this and it wont be the last time. When it comes to him, the man is a beneficiary of what I call the beautiful people syndrome. These people can do no wrong and everyone is eager to please them. Raila may not be beautiful but he is highly liked, loved even, because of his gift of the gab which he has put to good use. That and the fact that he is the master of spin. He has the masses eating out of his palms and not much is questioned. So, in answer to your question, yes, there is a double standard where the man is concerned. His remarks didnt start today, he has always used derogatory statements to put down his opponents. And please note the amount of temperature he raises when he accuses others of corruption and then compare that to the apologist tone taken when he is on the receiving end of the same accusations. I could go on and on but I think my point is clear.

Raila shuould know that, we will apply the smae scale across the board when voting in the next election. Just as Uhuru lost my vote, Raila too will never get my vote.Him and Uhuru have no diffrence!!!

Hon. Raila is like a pharisee who prays loudly at the top most part of the building to attract attention while he knows very well tha God is omnipresent. you can cheat the world but you cannot cheat your self and God. wikileaks has proved that even raila who claims to be as white as snow was involved in the maize scandal. his advisers seems to be obsessed with him believing that whatever he says and needs must pass. He claims to believe in ideals of the party he claims to be in yet history dictates otherwise. nobody can take him seriously when it comes to political parties he is used to moving from one party to the next it is not a surprise if he moves to PNU!!!!

The Kenya we want is not about Raila, Uhuru, Ruto, Kibaki. Nor is it about kikuyus, Luhyas, Luos,Kalenjins and all the other tribes. Its about Leadership. The only Man in the current situation who proves to be a well off leader compared to all polititians we have now is Raila Odinga. Leaders who want to unite certain tribes and isolate others are only taking us back to january 2008. We are all Kenyan and we should be treated equally. En I also add that all leaders should clear their names before making themselves public images. Who do you think you can fool when your name is full of scandals en you were easly cleared coz you are from these or that lineage. kenyan politics is nolonger Hereditary and the majority Kenyans will decide come 2012. And these time it will be a war btn voting cards and politicians, No voter should be involved.

Rao does not get away with speech because it is not hate at all.What he says is an obvious fact that all with brains and eyes can see.Every politician is in campaign mode right now and unfortunately in Africa,it is not issue oriented but who can besmirch their opponents most.In Kenya,if RAO never hit back at his opponents and vice versa,the silent party will lose big time.I don't mean to say "Hate Speech," is ok.NO.What i'm saying is that rhetoric is part and parcel of politics and there is a very thin line between hate speech and political banter.We can't keep on saying that everything coming out of a politicians mouth that stings is hate speech.If a guy says we can't be led by people who amassed an enormous amount of questionable wealth,where is the hate there?

Dont bother with Raila, he one of the few people who genuinely love this Country and its people, the only one living currently who directly contributed to our 2nd liberation with his blood! We can now abuse a president at will abue the PM at will and dont end in Prison just like some ur Grand Parents did to Kenyans!!!
He is saying the Truth and only the truth, Uhuru use drugs! which other evidence do u want, Ruto have been robbing us since Moi made him his Mbwa kali, what evidence do you want???
Kubali yaishe, Agwambo will be next Kenyan President under a beautiful constitution which will allow u to tell him whatever you want and not risk Prison or murder!! also its through work and genius that we have a new constitution which Uhuru and Rutos of this wolrd opposed!!