The world is mourning the passing of a modern day Kenyan legend, a champion of environmental conservation and fierce fighter for social justice. And even these words cannot begin to describe Prof. Wangari Maathai.

My first personal encounter with her was in 1997, while working for a local NGO, when I was tasked with monitoring her then campaigns for Kenya's presidential elections, as well as the Tetu parliamentary seat, which she both lost.

But despite such setbacks on the political sphere, her trail-blazing global fame soared, buoyed by her zeal for matters environmental. This was to culminate in her clinching the Nobel Peace Prize in 2004. 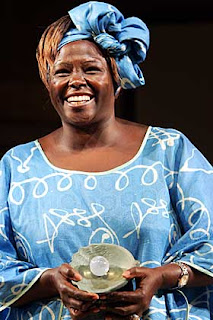 Prof. Maathai continued to scoop accolade after international accolade. I vividly recall attending one of the occasions to bestow her in absentia with an honour in Cape Town South Africa, and the awe that struck me, when she expressed her gratitude via a recorded video link, to clapping invited guests in a foreign country.

As her television reporter, I did interview her a number of times, the last of which was at the sidelines of an African Union conference in Dar es Salaam, Tanzania.

Her clarity of thought, when discussing pertinent issues was amazing and her steadfast focus on protecting mother nature was always a joy to highlight.

Farewell Prof. Wangari Maathai. The world is so much greener because of you and your spirit, legacy and inspiration will endure till the ends of time.
Posted by Albert Gachiri at 16:46