MADE IN KENYA TV SOAP: BORING OR BUBBLY?

It is no longer a secret. Television soap operas are some of the most popular programmes in Kenya, which explains why every local channel has a catalogue of them. Along comes a made in Kenya TV soap, which could either be bubbly and popular like foreign imports, or similarly boring to some people. 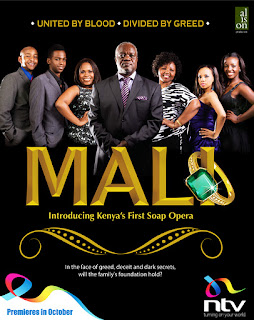 It seems those who hate soaps do so with a deep passion, whereas fans passionately follow the unfolding drama so religiously, so much so that their tears could flow freely just from watching a character's misery unfolding.

And men need not pretend any more that soaps are for dames and madams. A good number of avid followers come from the masculine side of the gender divide.

As a matter of fact, I have had the opportunity of answering a very late caller to NTV news desk, who was bitterly protesting that the soap being aired at that point was a repeat. A quick time check told me it was approaching midnight. And the voice was distinctively male.

So, will ' Kenya's first soap' continue to tickle the fancy of viewers, with the usual mix of people losing their memory only to gradually regain it to the detriment of the lead actor or actress, a glamorous wedding between people with sinister motives camouflaged as love, lot's of crying, and other staple soap plots?

Or will the interest wear out as the plot thins out?
Posted by Albert Gachiri at 17:11

The young Kenyan male was forgotten. Now almost all TV is catering for womens interests. No more action flicks.