It probably is not fair to say the Nobel Peace Prize comes home, back to Africa. But the 2011 women winners being announced just a day before Prof. Wangari Maathai, Kenya's and Africa's first female recipient of the coveted award, is accorded a state funeral, calls for a special exemption.

I also deliberately choose to overlook the fact that the Nobel honour was split between two daughters of Africa, Liberian President Ellen Johnson-Sirleaf and peace activist and fellow countrywoman Leymah Gbowee, with Tawakkul Karman of Yemen. 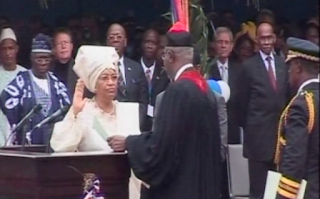 I believe it is a befitting sendoff to Prof. Maathai, to not only have the efforts of women recognized but that they also come from the African continent.

Maathai's legacy will of course endure perhaps to the ends of times, and her place in global history is assured. But the fact that there are more women in her mould only makes the world a better place.

Ellen Johnson-Sirleaf, after all has at the moment the exclusive honour of being Africa's first female Head of State and becoming a Nobel laureate just goes to confirm her leadership and visionary qualities.

That selfish shout-out for the African continent aside, it goes without saying that it also took great courage for Yemen's Tawakkul to head the Women Journalist Without Chains and lead her country's push for women's rights and democracy.

Here's is a toast then to all the joint winners of the 2011 Nobel Peace Prize.
Posted by Albert Gachiri at 21:39