BAD NEWS BEHIND THE NEWS ANCHOR

A TV screen in Kenya, during news time, can have a station's logo, a clock, two lines of lower-third story-tags, and below it, a scrolling ticker. The viewer is expected to follow what the news anchor is saying, despite all these distracting elements. I have no problem with a relevant still image behind the anchor, but having a live video feed of a busy night street is stretching it. 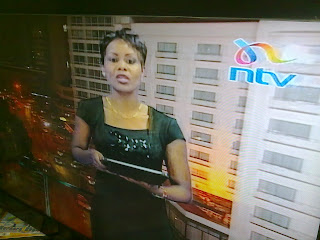 How is one expected to keep the concentration going, if right behind the news anchor, there is all manner of tiny movements, as vehicles keep passing by with their headlights on and some even flashing?

'Caring stations' go to the extent of warning viewers if a clip they are about to see has flash photography, which has been known to trigger inherent medical conditions. So you can imagine the agony of such a patient, watching news on this particular studio set.

And what really is the aesthetic value of having such a 'horrid' background as a news set? I find it too busy and a major hindrance to following what the anchor is saying. 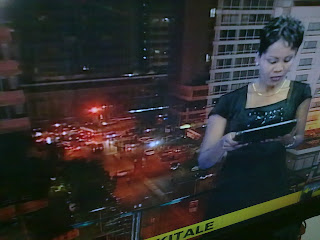 I wonder how many people, who like me, have noticed there is even a greenish neon sign that keeps lighting up and switching off, on one side of the anchor.

In the end, the eyes gradually begin to get fed up with this visual assault and the itch for the remote becomes irresistible.

NB: a colleague just mentioned to me he also gets uneasy watching the streamed video on this studio set. His source of discomfort however, comes from what he says is the lack of a sufficient depth of field. This he says, always makes him anxious about the possibility of the news anchor falling down, backwards!!

... the possibility of the news anchor falling down, backwards. That killed me! Btw I agree with you. Let us have still germane images.