It's not unusual for people to be named after famous personalities. And parents often bequeath their children with not one, but the full name of someone they fancy. But as a Kenyan, coming across a foreign TV reporter named, 'Daniel Arap Moi,' more than amazes. 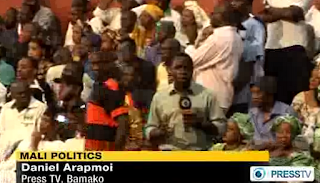 I don't know the exact circumstances that led to the Press TV reporter, now filing stories from Mali, to acquire the full name of Kenya's former president. But I bet that story would be of interest to many people in the East African country.

Already, there obviously appears to be a twist in that untold story. Normally, parents give their child the name of a person associated with positive attributes or a doer of great deeds. And if of age, a person can also independently choose to adopt the name of somebody they regard highly.

So how is it that one would want to be referred to, using the full name of Kenya's former President Moi, whose leadership is widely believed to have been a dictatorial one? I will definitely be surprised if presently,  I hear a person answering to the name Idi Amin Dada, Pol Pot, Jean Bedel Bokassa or Caligula.

The reverse would be true on coming across somebody named Gandhi, Lumumba, Mandela, Booker T. Washington, or Florence Nightingale. And as for the Jamaican dancehall artiste called Kibaki, (Kenya's current President), that is just amusing, if not hilarious.

It is a bit ironic then, to hear the Press TV reporter signing off with pride, as if fully convinced former president Moi's 24-year 'misrule' was admirable and worth immortalising.

What's in a name you ask? Well, it depends on the 'excess baggage' on that particular name.