OF AMBIGUITY AND HEADLESS HEADLINES

Is ambiguity the new method being employed by Kenyan newspapers to show they are non-partisan? It's either that by a very long shot, or some writers of headlines for local papers have not been doing a good job.

Going by the recent trend, the challenges of English grammar are proving to be more than a handful for editors, who normally have a mouthful of expletives for reporters with wanting language skills. 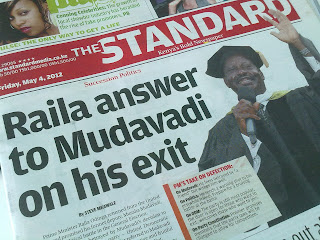 It is similarly possible and correct to infer that the headline talks of Raila's answer to Mudavadi, as a reaction of Raila's exit, (from God knows what!)

So which scenario did the headline writer intend the reader to use in making sense of the paper's splash? Going by an understanding of local politics, the answer is obviously the former. 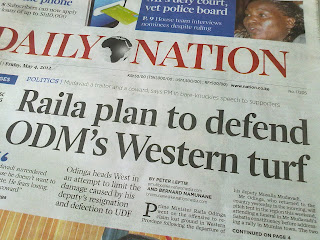 In this front page, the emphasis appears to have been placed on making sure the words chosen for the headline fit within the allocated two decks, as opposed to them making grammatical sense, which is a pity for a leading daily.

'To Defend,' simply hints at somebody doing an action. So the doer of the action here is Raila, I suppose. And the headline should thus have read, 'Raila plans to defend ODM's Western turf.'

Or going by the pattern of being ambiguous, it would also have been correct if the sentence was changed to, 'Raila's plan to defend ODM's Western turf.'

And a wild interpretation would be, the paper was 'urging' Raila to plan to defend ODM's Western turf. 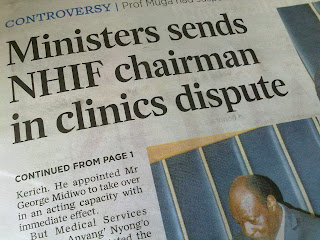 And this last example is just a plain massacre of the English language, and a shameful violation of the noble role of any credible mass media outlet: to communicate clearly!

Where did the Ministers sends (sic) the NHIF chairman?