THE BROKEN RULE OF BREAKING NEWS

Breaking News. Immediately you see this textual message flashing across your TV screen, that is where your eyes will shift focus to and you brain will swiftly lock on to. But for television stations in Kenya, there is still a strong belief that one can continue to concentrate on the normal programming, as they take note of the lower third breaking news information. 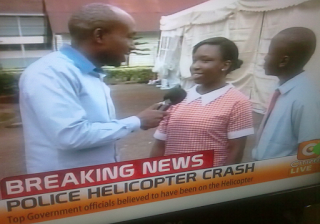 So, like it happened soon after last Sunday's tragic helicopter crash, the audience was supposed to quickly note the 'very serious' news development below their screen and then dart back to the goings-on in the gospel show live broadcast, on Citizen TV. 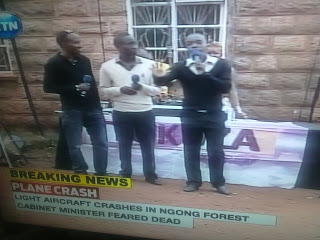 And if you were tuned into KTN, then one was to similarly take note of the the fact that a Cabinet minister was being feared dead, after an early morning plane crash, before or while continuing to enjoy the hilarious comic relief infused in yet another gospel show. But if you were watching NTV at that moment, then the news that the country's Internal Security minister and his Assistant were believed to have been aboard a plane that has just crashed, should have been taken in stride, as you take in the spiritual message contained in the song being played, in still, another gospel show.

And if that air crash had happened on a Saturday, then it is safe to assume that the Breaking News would have been splashed on the TV screen, as the stations relayed cartoons or some children's programmes.

The point I'm trying to make is that some types of Breaking News need to be broadcast in a proper context, which reflects the needed seriousness.

Yes. I know how long it can take before a graphics team or studio crew is assembled, let alone the time needed to get an anchor or news presenter to be 'summoned' from their homes.

All I'm asking is that for such a Breaking News scenario, what is currently on air should not be at so much variance with the immediate context and accompanying emotions of the day's biggest news story.

Most local stations after all, did interrupt their normal programming later, to focus on that breaking news, almost ad infinitum.

So why not disengage from the day's normal transmission schedule, a little bit earlier, if the context of the current programme is not right for the Breaking News being splashed?

I'm glad to see someone is appreciating my concerns. I'm always happy to hear from readers of my blog. Thanks Esther.

very well put Albert the contrast was just too much