The Kenyan media yearns to associate itself with issues based politics. The intention is to steer coverage of politics and national discourse away from personalities. But the same media finds it hard to consistently stick to issues based coverage. It's no wonder the Ugandan sugar import issue is being mainly covered from the point of view of politicians. 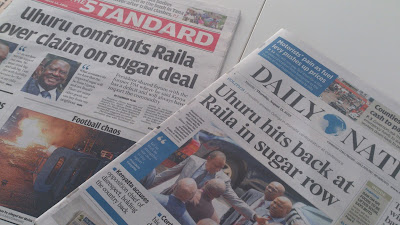 Granted, politicians are meant to carry the views of those they represent, because ultimately, the power is meant to reside with the people.

And their will must be expressed, even if it means bringing to the fore opposing views from the political divide.

But a responsible media must never abdicate it's agenda setting role.

In the controversy surrounding the importation of Ugandan sugar into Kenya, I for example, would have wished the Kenyan media to have their own main story, independently researched, as the lead.

The input of industry experts, sugar factories representatives and importantly, sugar-cane farmers, could have been sought. 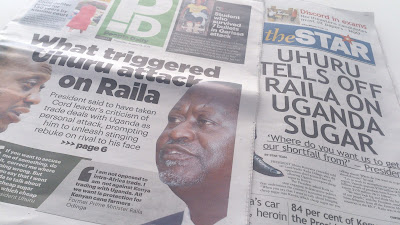 And then a related story, anchored by what the government and opposition members are saying, would be the secondary focus, (and they can attack one another ad infinitum).

Admittedly, such an editorial approach, though high in public interest, could be low on commercial interest, a.k.a. newspaper sales.

Below are some of the initial reactions from social media, on the Kenya-Uganda sugar deal.