One of Kenya's national broadcasters has partnered with tourism industry players, to promote the country's wild and natural beauty on TV. Showcasing the stunning scenery on prime time, can inspire the audience to appreciate it, and also market the destinations. But in the first episode, the spectacle was stale by a margin of...15 years! Viewers were hooked but also hoodwinked. 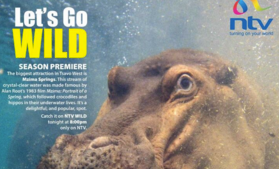 I pity the poor soul, who resolved to tour the highlighted attraction, in the hope of catching a glimpse of the wild animals shown on that TV programme, doing amazing things underwater.

You know, a lot can happen in 15 years... in the hippo calendar.

Hold on. Even for a human being, a lot can happen within one and a half decades.

15 years ago, where were you? I think I was still in Journalism school, harbouring lofty ideas about rescuing the local media scene from the jaws of irrelevancy. But I digress.

Back to the hyped hippie hippos, the camerawork in the documentary was indeed breathtaking, in the league of the legendary stuff from the National Geographic channels.

And I'm sure, as I have earlier hinted, a number of viewers secretly or loudly made a mental note to visit the magnificent Mzima Springs, to experience the natural wonders first-hand.

I did too, until my bubble burst wide open, as I keenly followed the credit roll, at the end of the TV show. One thing stood out:

What! Were viewers being treated to a trip down hippo memory lane?

So, what are the chances of finding the showcased ecosystem intact, 15 years after the shooting of the documentary?

I felt cheated, conned, duped by an unabashed television fraud.

And to think how much energy was used to promote the programme, by both the station's staffers and external stakeholders.

The TV station could have considered dispatching a crew to Mzima Springs, and have links recorded from there, or even delivered live during the show, to make magical Kenya look more realistic than fictional.

That would have been more meaningful and impactful, unlike the social media hashtag frenzy, or the lazy amalgamated real-time online commentaries, while the show was on air, feigning self-adoration and spewing misguided adulation.

I know for a fact that the same broadcasting station has previously done at least one feature on Mzima Springs, not that long ago, and there was nothing that came close to what was screened.

Does that explained the felt need to grab something from international archives and regurgitate it locally, to better bait the viewers (and also the station's apparently mesmerised employees?)

Well, the wild intention is in the right place, but it should deliver interested viewers into a reachable wilderness, one that can still be savoured and treasured.