Headlines must ideally not over-promise the content of newspaper articles, when enticing readers to partake of the stories. But it does happen, especially when sensationalism is the preferred route to higher circulation figures. A headline, however, must never contradict the facts in the main story. Like it happened, in an increasingly misleading Kenyan leading daily. 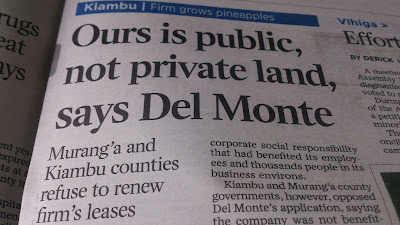 
'Ours is public, not private land, says Del Monte'

But shortly afterwards, in the article's all important first paragraph, this is what one encounters: 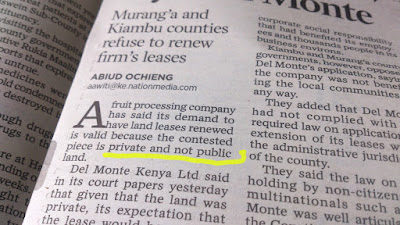 Granted. The author of the newspaper article, and the one who crafted the headline, are not the same, and they probably didn't even meet before the article was published.

But there's good reason to believe there was an intermediary, or two (or three and beyond), in either the role of sub-editor or revise editor, (if not news or managing editor), and perchance, an editorial director.

And yet, glaring mistakes are frequently allowed to infuriate the sensibilities of readers.

So, just how easy is it, to confuse the meanings of private and public property, and more importantly, how easy is it to also confuse and annoy 'erudite' readers? 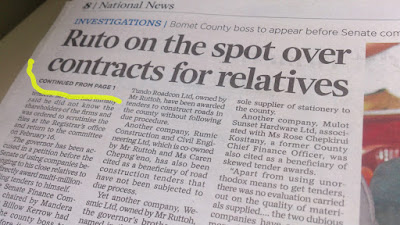 The 'misleading' leading daily was not done yet, on this unfortunate day for its esteemed consumers.

One of the inside stories alludes to some introductory section of an article being on Page 1.

Funny thing is, up to that point, I could not recall coming across such a story, having started reading the paper from the front page.

The sensible thing was to dart back to the main page of the newspaper, doubting I had missed something. 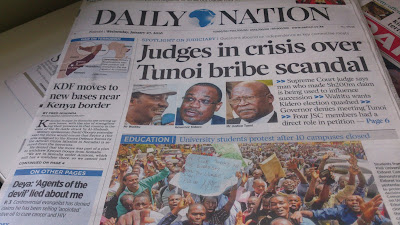 And guess what? There was no such story!

Seeing that I can't demand a refund, (I was reading the office newspaper), my humble appeal to the newspaper's publishers is to weather external pressures and hold on dearly to its refined editors.

Controversial editorials will come and go, but good editors should nevertheless be celebrated, not intimidated, vilified and crucified.