It takes considerable effort to come up with original or compelling television news features. It's even more difficult for new reporters. At times they try so hard, thinking they are on to something special, unaware that similar stories have already been done. But there's no good reason to glorify and unwittingly celebrate an illegality, in the name of a TV news feature. 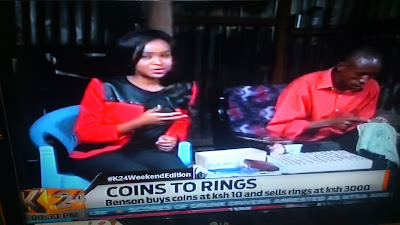 Granted, the process is very ingenious and innovative.

And the end result is brilliant works of art.

The entire concept though, revolves around turning, what is referred to as 'worthless coins' into 'precious rings' and earning the craftsman a tidy sum.

The report alludes to the purchase of coins, as raw materials, which are then skilfully transformed into rings, in a process that probably involves heating, heavy hitting, cutting, and filing. 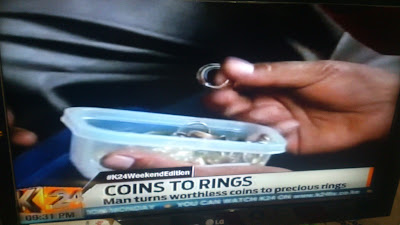 However, it is worth noting that coins, just like notes, are part of a country's legal tender.

The blacksmith/jeweller definitely tampers with, and actually defaces the coins, during the production of the rings.

If I recollect properly, he did mention using Kenyan currency coins at some point, which is legally problematic.


Any person who melts down, break up, defaces by stamping thereon any name, word or mark, or uses otherwise than as currency any coin current for the time being in Kenya is guilty of a misdemeanour and is liable on conviction to a fine not exceeding eight thousand shillings or to imprisonment for six months  or to both.

Whether the TV feature is self-incriminating, on the part of the featured craftsman breaking the law, is perhaps debatable.

What is certain is that there's hardly any justifiable reason to propagate an illegality, disguised as an interesting TV news feature.

I think this blogger has WAY too much time on their hands.

If I had 'WAY too much time' on my hands, I could have replied much earlier to this observation. So, I'm really sorry to disappoint you because even my free time comes at a high price. But I do try to make time to engage positively, in a progressive manner.