Kenya's 2017 electioneering period continues. The date for the repeat presidential poll has been revised. This comes hot on the heels of the country's highest court giving full details of its decision to annul the initial presidential election. The local media coverage though, suggests the press is partisan on these political and judicial developments. 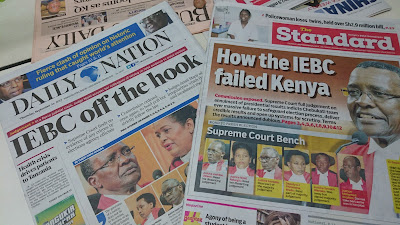 It's often stated that facts are sacred. And yet it has not escaped the notice of many that in some instances, the press appears undecided as to what exactly is factual.

The audience is thus confronted with variations in coverage, which raises suspicion about the media's accuracy and credibility, especially if a single event is accorded almost contradictory interpretations.

Granted, and as it has previously been pointed out here, product differentiation works better for competing newspapers, which means not putting the same content in front of the buying reader.

However, one would expect legal matters, especially pronouncements by high ranking judicial officers, would be reported with little or no variances.

Unless, marketing...nay...political allegiance also informs the coverage by the Kenyan media.
Posted by Albert Gachiri at 21:35