It's been almost a week now. And yet the puzzle has adamantly remained unresolved. Many younglings are bound to have given up almost immediately. But a poor soul somewhere could still be in agony, having been made to feel intellectually inadequate. And yet it could as well be a case of looking for Caesar's missing scissors. 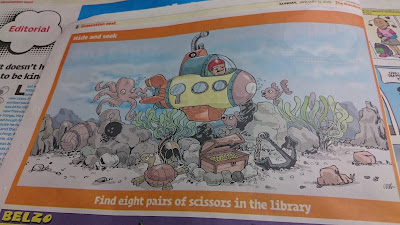 The illustration is very clear but there's hardly any clarity in the accompanying instructions.

Normally, one would happily be already counting down the required objects within minutes.

But a minute detail seems to be amiss here. The task is:


Find eight pairs of scissors in the library

The picture, however, depicts an underwater scenario.

And try as much as one possibly can to spot them, there's not a single pair of scissors in sight.

It's not right for a national newspaper to subject especially its young readers, to such a wild goose chase, due to an editorial oversight!
Posted by Albert Gachiri at 22:24