The beginning of a broadcast news story, newspaper article or even online news post is a very critical element. It summarises the main points or facts in a way that grabs one's attention, but still leaves one yearning to partake of the rest of the content. An intro should not be overworked. 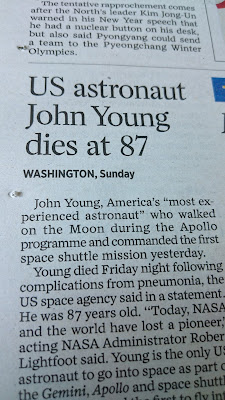 It's easy to understand why scriptwriters, reporters or editors would be highly tempted to craft an elaborate lead in.

This, it is hoped, would better entice or hook the audience, and also sustain interest in their content.

But it's better to keep it simple, because natural storytelling would not usually involve bombarding the content consumer with complicated details, or an overload of facts, at the very beginning of the engagement.

Indeed, trying to cram too much information in that initial encounter with the interlocutor, is likely to be an impediment to sustaining further interest.

In this newspaper article, the first paragraph is a typical example of trying to say:

There is somebody, who is an astronaut, the most experienced in America, who walked on the moon, was part of the Apollo mission, and a commander of the first space shuttle mission...

Why squeeze all those details in the beginning sentence?

How is the reader expected to process that information overload, without exceeding the brain load capacity?

It's no wonder the sub-editor also got lost in this windy and wordy maze, and actually left out the one detail that made the intro to be devoid of any clarity.