News has moved from cycles of 24hours for newspapers, hourly for radio and TV, around the clock on websites and even 69 seconds a minute on social media. Traditional news outlets have all but lost the battle of breaking news. But providing context and analysis remains a bastion of legacy media. Episodic news coverage, however, helps the audience to miss the big picture. 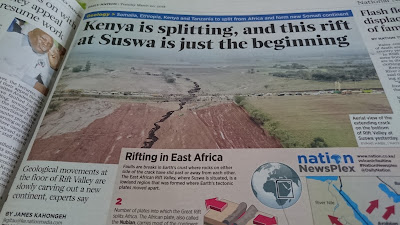 After heavy rains pounded many parts of Kenya, local dailies narrowed on a particular area that had developed huge cracks across a busy highway, with the fault lines extending for quite some distance.

Initially, the reportage was anchored on what officials in charge of road construction and maintenance had to say, and efforts to ensure urgent repairs allowed the traffic to move again.

But days earlier, one of the dailies had a story about a community worried about repeated tremors, not so far from where the ground appeared later to be opening up. 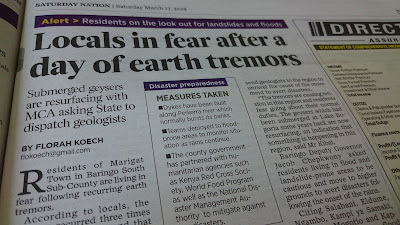 Yet there was no indication that the views of an expert were sought, or a corroboration of the reported seismic activity with relevant geological data.

Thereafter, TV news channels trained their focus on the unusual fissures that emerged after the heavy downpour.

And now perhaps sensing there could be a more 'juicier' story, there was suddenly talk of Kenya splitting, an tectonic plates shifting. 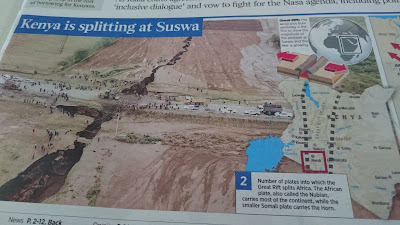 To underpin the supposed seriousness of this 'newfound' issue, the story got a page one treatment, and this time, lots of experts were captured in the article.

The latest instalment of this episodic coverage is a an editorial. 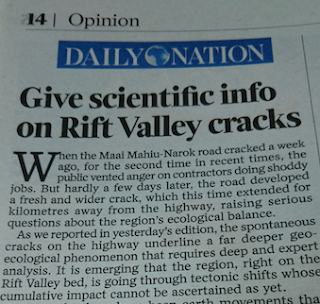 All these elements appear to be connected:

- even the country splitting

- and the possibility of Kenya finding itself in another new continent, detached from mainland Africa, with other neighbouring countries.

But the information shared by the media did not adequately equip the audience to make sense of these related developments, in my opinion.

Let's see where the next episode takes us.