FACTS AND THE TRUTH BEGETTING AN UNTRUTH

The moment the media puts out a news story, it develops a life of its own. If something is not clear in a particular story, clarification can be sought within the newsroom. But that is not the case with the audience out there. There's nobody to ask for further explanation, or additional context. The result could be facts and the truth begetting an untruth in a reader's mind. 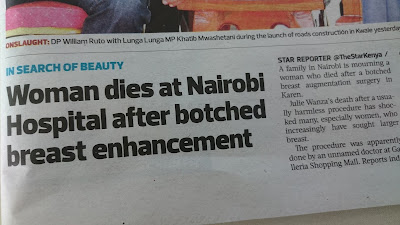 In the newspaper article above, the headline contains factual information, but at the same time, a very misleading and negative impression could be created about a 'reputable' medical facility.

Yes, a patient died at the hospital indicated by the headline.

But a reader glancing over that headline might easily conclude this tragic incident began and ended at the same medical facility. 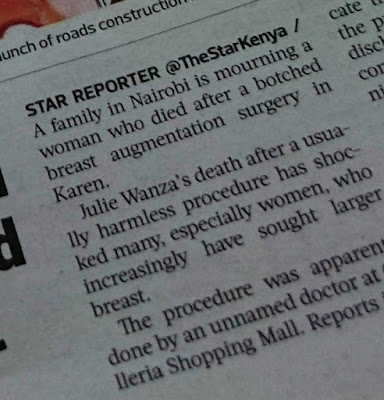 Only by reading through the body of the story would the reader be able to know that this case started in another medical clinic, and the patient only passed on at the hospital reflected in the headline.

The medical facility would rightly take offence if this story ends up making inappropriate insinuations, by directly linking it with the botched operation and subsequent death of the patient.

In other words, the truth here begets untruths, by virtue of the way this newspaper is treating this story.

The result could be a high-speed chase, involving a reputation damage ambulance chaser!

Email ThisBlogThis!Share to TwitterShare to FacebookShare to Pinterest
Labels: Breast Enhancement, The Star