A lot of gender mainstreaming agitation has been witnessed in Kenya, especially with regards to leadership and political representation. And both the social and mainstream media have played a key role in fighting gender-based marginalisation. This noble agenda, however, is at times undermined by the same press. Is a male lawyer any different from a female lawyer? 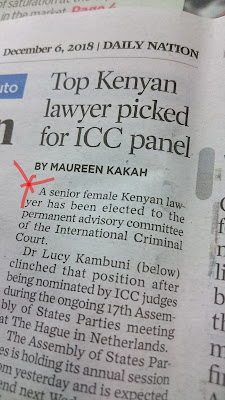 In the article above, the story celebrates the achievements of a high flying Kenyan lawyer.

But the editor, (try putting female editor here), finds it appropriate to describe the lawyer as being female!

It should rather be obvious that it's really unnecessary to ascribe gender identities for certain professions like law.

The reader can easily establish that the lawyer is a woman because of the provided name and picture.

So, to expressly state that the lawyer is female at the very beginning is demeaning, condescending and even a disregard for the many achievements of women in various professions.