News reports aim to truthfully convey information in a fair and balanced manner. It may appear like a simple task, but other factors often complicate the processing of facts. The audience is assumed to be in need of protection from harmful news, yet the media presumes the right to know also needs to be protected. Some reports though, need a thorough panel beating. 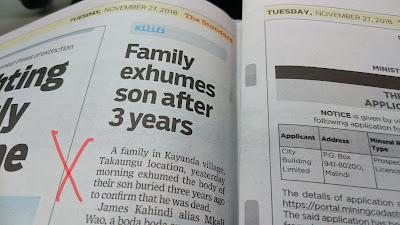 In the article above, the details in the all-important first paragraph 'correctly' summarise the most important facts of the story.

- A family in a given locality

- Exhumed the body of their son

- Their son had been buried for three years

- They wanted to confirm that he was dead

Every thing checks out in the journalistic manual of packaging news reports, except the last bit.

A reputable newspaper of record in Kenya, wants readers to believe there's logic in seeking to ascertain somebody is really dead, three years after they were buried!

Ignore the fact that a legal process is necessary before permission is granted to exhume a body.

Concentrate a bit more on the story being very unusual and deserving of media coverage.

Does one disturbing element hit you from the underworld?

I got two blows from the story...namely... Spooky and Spurious!