Information shared with a 'Breaking News' tag grabs immediate attention, either because of it's significance, and/or the fact that what's being reported has just happened. It's thus a great way for a news outlet to showcase its ability to dispenses the very latest information. A key consideration, however, should be the relevance of the breaking news to the wider audience. 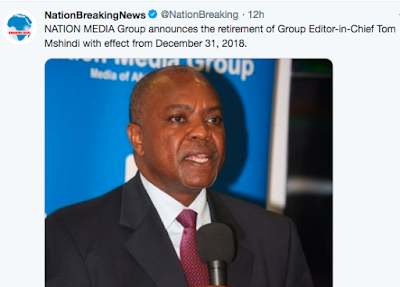 In the case above, it could be of interest to some that there's a change of editorial guard at the 'largest ' media entity in the East and Central African region.

But does this make the development suitable to be shared as breaking news? (Or with a breaking news handle?).

It's unmistakable that the source of the news was internal, so there's zero possibility of another media house getting the information out first, (now that would be a real breaking news, right?).

So, of what interest is this information to the general public?

At the very most, I think this implied change could easily have been sufficiently shared as 'normal' news, without the added sense of urgency, or heightened public interest significance. 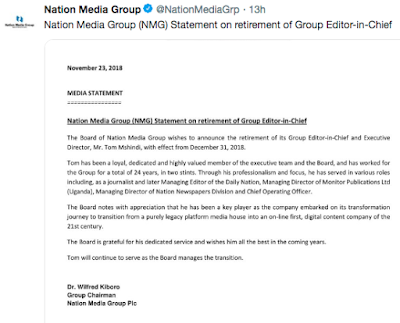 And at the very least, this information could also pass for an internal consumption notice.

But the fact that this media establishment is a publicly-listed company, could perhaps make the management change acquire another level of importance, which requires transparency.