TV GRAPHICS: TO ERR AND TO AMEND ERRORS IS HUMAN

To err is human. But so is to amend errors. This is what minders of on air TV graphics should constantly be reminded. And this courtesy should be extended to other personnel involved in the production of a news broadcast. Sometimes the mistake is so glaring, yet the editorial crew is just staring at a visual aid cue. 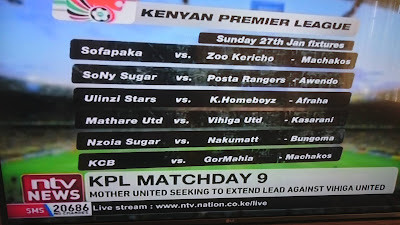 In the sport story above, the fixtures for that particular weekend's club football in Kenya, are straight-forward and easy to follow.

But the lower third tag blatantly renames one of the teams involved.

In the newsroom, the habit of doing a spell-check for all scripts is greatly encouraged.

Ironically though, such a highly desirable standard operating procedure could perhaps have yielded the graphical blunder.

It's strange though, that Mathare Utd could transform into Mother United, but Vihiga Utd cannot become Vicar United!