TV NEWS AESTHETICS AND A FACE ON THE KNEES

Television is a visual medium. The eyes are fully engaged, while the ears take in the audio component of the content. Besides the science of how a broadcast is perceived, there are also artistic elements in the presentation that enrich the viewing experience. But any major deviation from what the natural expectation is, can be problematic. Like a face on the knees. 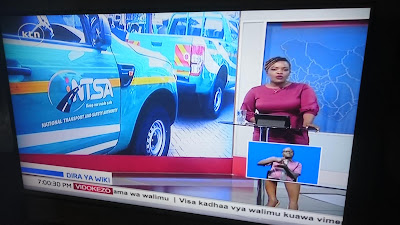 The studio set designer above, probably thought everything checked out, in positioning the news presenter on the side, to allow for a large video wall space, for contextualising the specific news about to go on air.

And looked at with the naked eye in the studio, the set-up probably meets all the required standards.

However, graphically inserting another video of the translator, and positioning it on the bigger image captured by the camera, could bring in some unintended consequences.

Here, the viewer is being asked to accept that it's natural to have a news presenter standing, with the sign language interpreter fixed somewhere on her knee region, and her legs appearing to be joined with the upper body of the interpreter.

These kind of visual distractions undermine a viewer's focus on the substance of the news content.

It's not easy on the eye and it's hard to mentally process the creative miscue.