VARIETY AS THE SPICE OF EVERY NEWSROOM: THE CASE FOR FOREIGN INTERNS

As a tradition, the Nation Media Group regularly accepts nationals from various countries as interns. They bring some fresh perspectives and a new set of eyes that help interpret every day events in new ways. And yet their presence, especially on television, it appears, is not an altogether welcomed sight. 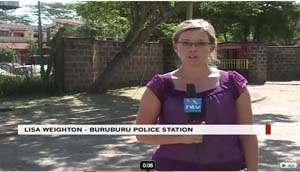 Not surprising perhaps, a foreign national reporting on local issues, cannot be expected to have a 100% grasp of the subject matter, right?

Wrong, in my considered opinion. If the intern or even an exchange programme journalist posted to a Nairobi media house has had relevant prior training, then they have a reasonable capacity to do a professional job.

In any case, such trainees are not just allowed a free hand but are guided every step of the way by experienced editors or news producers. So why should it be automatically assumed they cannot relate in a sufficient manner, with local issues they have been assigned to write or report about?

Moreover, is the colour of one's skin such a big deal that a white trainee will be viewed as having taken up an opportunity that should have been accorded a 'more' deserving local resident? I think not.

A Local Kenyan Story, as Reported by Canadian Lisa Weighton

Unless of course the debate is taken through the narrow paths of racial profiling, historical subjugation or post-colonial hang-ups and supremacists polemics. In any case, Kenya is a multicultural society and fast becoming multi-racial to a critical extent.

And as argued by Robert Hernandez:

"If we don't reflect our communities....if we don't listen to others outside of our own individual communities, we've missed the point of journalism."

Now therein is a gem worth memorising.
Posted by Albert Gachiri at 14:29

couldn't agree with you more albert. so many of us are into the retrogressive practice of racial profiling and if we are the same race, we narrow down to tribal lines. Thats a nice piece right there

Mr Albert, you are one guy i admire most in news world, sharp intelligence, creativity, originality and independent mind. But I will fault u on this one above" If you make people think they're thinking, they'll love you. If you really make them think, they'll hate you. Ponder this one by Adrienne Retch,"False history gets made all day, any day,
the truth of the new is never on the news.
Foreign interns deserve no place in our newsrooms. Is their prior training different from our locals. Does it smack of any worthiness or variety.

I have never seen any value in their reporting, nothing really to say wow! In fact their reporting ends with their accent after that nothing, its just flat. I have never known they were interns before thanks for information though.

@Bwandera - Until you get out of your cocoon of discrimination then clearly even you can not work in a foreign country. Having worked for nation and with some of the international interns I can tell you they take time to understand the people and issues before they do the stories. You would want to be given a chance, please give them a chance too.

i went for an audition in a white western country to be a journalist and i was flatly told am good but my african accent will make it hard for the majority of pple in that province to understand me so i was let go , now what about her accent is it understandable to the however many millions of kenyans listening?the fact is no and so its natural that the majority pple in any country will want there way .

I never knew many Kenyans had this bad attitude towards foreigners..What would you say if foreign universities took the same approach towards African students? People. lets get out of the bubble and embrace diversity..