MISFITS & MISFORTUNES: WHY UK RIOTS OFFER LESSONS TO THE UK 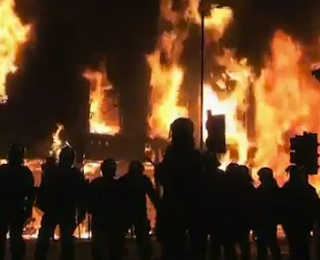 That the riots in the UK have been exacerbated by social misfits is highly debatable. That the breakdown in law and order has occasioned great misfortunes for a hitherto stable country is obvious. But the main realization for authorities there, should be: the UK riots offer greatest lessons to the UK.

There's hardly anything strange in people acting like hooligans and causing mayhem in the streets in Kenya or generally countries that unwillingly carry the Third World tag. Nor is it surprising to see hordes of youth looting and causing rampage. (OK. 9 year-olds stealing alcohol is just weird).

The poverty levels in developing countries have a knack of bringing out the worsts from citizens lacking basic sustenance, who at times are deprived of very fundamental rights as human beings. But if truth be told, even that should not be a reason enough to turn violent.

But here is a very wealthy country, that even manages to make regular payments to unemployed people, who mostly consist of youths. Here is a country, where on calculating how much one is going to earn by taking up a job and comparing it to the financial handouts from the state, one can amazingly opt to remain jobless, because it's more lucrative.

So is there another underlying cause for all the disturbances in England, the apparently ill-advised shooting by police in Tottenham notwithstanding? Why was the rioting not confined to the area where the incident occurred? The answers to such queries would offer invaluable lessons to the UK.

But to many Kenyans perhaps, the UK riots offer a mixture of sympathy, amusement, wonder and amazement. Below is a sample of reactions from social media networks, locally.