Now, turning to an inspiring story from.... Now, it is emerging that....Now....Now....Why is this word so easy on the tongues of Kenyan TV news anchors? Is it a sign of laziness or just a fallback or default word to (mis)use, when introducing a story?

Placing 'now' at the beginning of a sentence is not a grammatical mistake, but if it appears forced or  disconnected from the words that follow, it would make the sentence sound awkward.

According to yourdictionary.com, as a conjunction, 'now' is used to covey the meaning of 'since' or 'seeing that,' e.g. 'Now that you have graduated, you will be required to start repaying your student loan.'

As an interjection, it's used with no definite meaning, to provide emphasis or to resume one's remarks, e.g. 'Now, many are the times I have warned him about gambling.'

Or is the intention to mechanically use 'now', borne out of the false assumption it would contribute to the newsiness of a story, by sort off implying very current information?

Now that I have pointed out that cliche, it brings to mind blunders regularly starring in Kenyan broadcast stations, during their prime time newscasts. 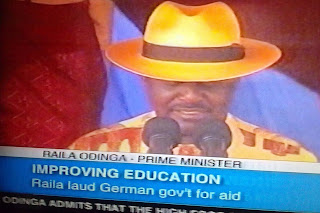 The lower third text is arguably the commonest place to mine English language howler gems. I am aware though, of the pressure news producers goes through, which makes them prone to making errors.

First of all, one must have the story tags ready in good time after making them short enough to make sense, while restricted to the number of characters that will not bust and go off-screen.

As a news producer, I  often used to wonder why my own story tags would embarrassingly contain hideous mistakes, even after running a spelling and grammar check.

It's only after realizing the setting for the Word spell check on my desktop, was such that words in capital letters would be ignored, and yet that is how the tags were being displayed entirely.

I occasionally still flout grammatical rules, of which I blame the pressure to have them ready before the news bulletin begins. But even I do appreciate that there should never be a reason to have 'silly' mistakes on air.