SEPARATING DOWRY FROM BRIDE PRICE: WHO PAYS WHAT?

Dowry. Bride price. Going by a recent Kenyan newspaper article, one may easily think these two words mean the same thing. But in actual fact, though both are some form of payment, each carries an opposing meaning, depending on who between the bride or groom is receiving the payment. 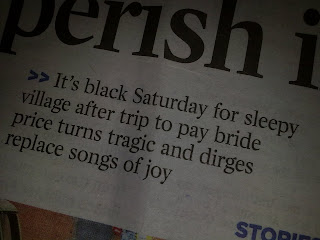 The Daily Nation's front page story of 21st August, was about some tragic news of a road accident that killed over 20 people. And among those who perished were relatives, who were returning to their village after a trip to pay bride price.

Further reading of the article shows that it was a man, who having living with his partner as husband and wife, was going back to his in-laws to complete paying the bride price, in line with the local traditions. 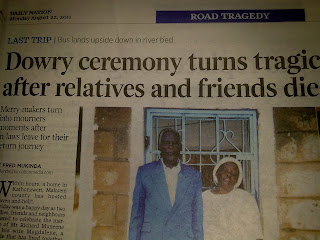 But in the inside pages, the same newspaper made reference of a dowry ceremony, in a related story about the same tragic accident. The facts though remained that it was the man's family, going to his 'wife's people.'

It appears like both bride price and dowry here, are used to mean the same thing. But as aforementioned, that cannot be accurate. according to the online free dictionary:

"Dowry is money, goods or estate that a woman brings to her husband in marriage."

So in the context of this story, any reference to dowry is misleading. Bride price fits the bill though because it is the man's family that was visiting their in-laws. The dictionary meaning is:

So Kenya's leading daily erred on two fronts in its coverage of this particular tragic story. First on account of referring to dowry whereas it was the man's family visiting his wife's people. 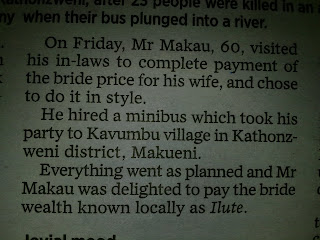 And two, using dowry and bride price interchangeably, hence implying they mean one and the same thing. A double apology to readers would perhaps suffice!
Posted by Albert Gachiri at 21:43

Both definitions are incorrect gramatically. Dowry"......or estate that a womEn bring....."
Bride price"......property given BY a prospective bride's family BY the prospective....."

Whoever posted this should stop using that reference website. If they've copy-pasted the definition of "Dowry", they should re-read that definition. Errors abound.

"Dowry is money goods or estate that a WOMEN brings to her husband in marriage."

Apologies for the errors. And thanks for pointing them out.

You may need to remove the log in your eye first. That sentence doesn't make sense. #justsaying :-)

Error has been noted, regretted and corrected.

I totally agree. I posted the first comment and as you can see,the definition of a bride price is also wrong. By has been used twice, so TO whom is the price given if it is given by both parties???

..and if I may add...my pipo dnt care wat the dic says,all they know is...we pay for the males who get wives n we get paid for the girls who get married,thats all we need to know :)

I wonder if that dictionary is correct and whoever came with the definitions surely is misleading us. For my understanding-"DOWRY-BRIDE PRICE" is money, property, or any thing agreeable between the grooms parents and the brides folks before they marry. There are more or less the same thing.

Depends on which country you are dealing. I have heard that in the US and India - the brides family pays for the wedding ceremony, meaning that they would be paying dowry - if your definition is anything to go by ie the brides family contributing assets/food/money to the wedding.