SERVE THE TV LAUGHTER, BUT HOLD THE VOMIT

Visual assault. Highly distasteful and insensitive. That does not even begin to describe the disgusting clip aired by a popular Kenyan television station, in an early morning broadcast. What the producers of the show or the editors were probably thinking would be hilarious, turned out to be very nauseating! 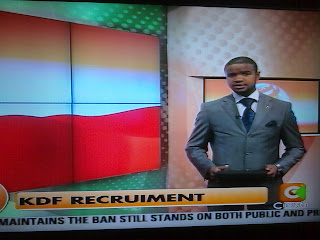 I can stomach, (with difficulties and regular bouts of indigestion), the numerous grammatical mistakes and elementary spelling errors, common on local TV stations. But not when the channels disregard their audiences' sensitivities

There I was trying hard to multi-task by taking my breakfast, while at the same time concentrating on the morning show of this particular TV station.

And just as I'm about to swallow a thoroughly chewed piece of peanut buttered bread, the person on the screen, pours out the contents of his guts on this poor lady he was conversing with, and follows it up with a truly despicable encore.

Now, it is all well and dandy to try and liven viewers' mornings, using hilarious and at times bizarre YouTube clips.

But before you decide to broadcast a video clip involving vomiting, please hold that thought, pause and reflect.

Are tolerance levels that universal, when it comes to watching somebody launching an inter-intestinal, stomach to mouth puke nuke?

As for me and members of my household, that will be a polite, 'Hell No!!'