Kenyan politicians have heightened their vote hunting strategies, with a General Election just months away. And the local media is now inundated with daily campaigning reports of the various aspirants. But is this 'excessive coverage' adding value to the electorate? 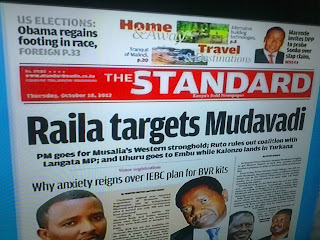 Yes. There is all that talk about empowering Kenyans to make an informed choice at the ballot box. That the media is being used as a conduit of the political ideas at play, which are then unpacked and 'formatted' for the consumption of the general public. 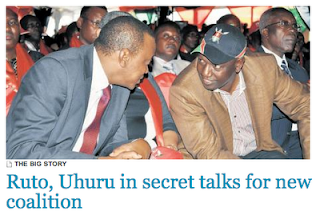 In my opinion, the media needs to step back and let the politicians do as they wish in their individual capacities and only report on political matters that are of weighty significance to Kenyans.

In the end, it can very well turn out that politician A, B, and C all end up on the same side.

So, spare the audience the agony of trying to understand the plots and sub-plots of political posturing, in the build up to the next General Election. Let issues and ideologies dominate the coverage in the press.
Posted by Albert Gachiri at 23:59