It's not entirely unusual. But it's a very bold endeavour. That the owner of Kenya's most dominant media enterprise has chosen to be publicly associate with a coalition of political parties, ahead of a General Election, is either tactically brilliant, or brilliantly tactless! 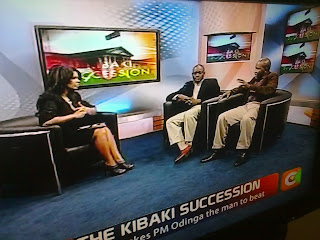 Do spare a thought for staffers of a such a 'compromised' media entity. Try as much as they can to be neutral, their coverage of the country's political developments will be perceived to carry the bias albatross.

But by and large, most of the mainstream media houses in Kenya have been known to editorially lean towards a particular political persuasion, if ever so subtly, or at times even blatantly.

You can't therefore expressly criminalise a Kenyan media outlet for overtly identifying with, sponsoring or even supporting a political party, like in other parts of the world.

In the event that the political side being backed by the said media house emerges victorious in the Kenyan polls, then undeniably, it will be viewed very favourably by the incoming administration that it actually helped to propel to power. Brilliantly tactful on this account.

However, after antagonising those opposed to its chosen political stance and strapping the employees with an identity crisis, borne of disregarding the journalism principle of balanced reporting, it would be brilliantly tactless, if the media house is on the losing side, after the March 2013 elections.
Posted by Albert Gachiri at 14:43

Great point. Please note that your concerns have been captured in paragraph 3 and 4!

Since, political leanings have been implied, this is a bold step by the RMS Chair (be the Foxnews of Kenya?) . Yes he may turn out to br right or wrong, and may lead to some loss of viewers, advertisers or revenue, but let's have leanings out in the open. Maybe next, newspapers can articulately endorse candidates and advise their readers.

Indeed, it's about time everything is put out in the open. Why should local media houses continue to pretend they are neutral in their political news coverage? The various slants eventually come to the fore.