VOTER APATHY AND THE FOLLY OF AN IGNORANT BLISS

It's shocking. But very indicative of the misinformation informing perceptions about voter registration in Kenya. The fingerprints captured by the Biometric Voter Registration kits, it's wrongly feared, will be used to pursue criminals. This is one of the reasons feeding voter apathy sentiments. 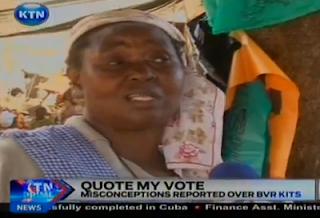 Others include misconceptions that the BVR kits could lead to infertility or cancer-related ailments. Assurances from the Independent Electoral and Boundaries Commission seem to be futile in turning this worrying tide.

But analysts would be quick to also point out that the scars of the 2007 bungled General Election have not yet healed, dissuading many potential voters from wanting to actively participate in Kenya's electoral process.

Still, IEBC in my books, could have done a better job of preparing potential voters to the workings of the BVR kits and establishing existing realities and myths, while at it.

It would then have been easier to identify and rectify any untoward beliefs through appropriately designed intervention strategies, (do forgive the NGO parlance).

Without resorting to the initial funding, tendering and procurement hurdles, is there a credible reason as to why there was no community diagnosis or baseline survey done to establish existing perceptions about voter registration? 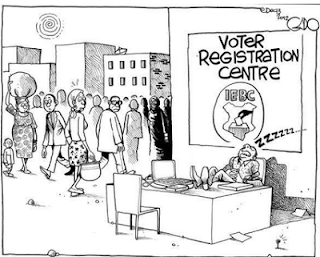 So now we have a discomforting situation and as usual, a reactionary local media is trying its best to put the issue of voter apathy high up in the daily news agenda.

But again I ask, is there no forward looking media outlet that would have been capable of correctly anticipating the situation the country now finds itself in, as it hurtles towards another national election?

Ooh. I know. It is always juicier to focus on the politicians, right?

It's actually a legitimate concern for some voters - to realize that that the government now has their ID and fingerprints in digital format (not realizing that the info is already in government hands, but in offline formats like on the ID cards they carry)

The use of BVR has been shown to curb fraud in immigration applications, as seen in reduced the number of applications from some countries - hence it can be a positive deterrent

That's a great observation. The IEBC should have still sought to identify this issue early and find suitable ways of assuaging the concerned voters.

I have not registered as a voter and I will not, I've never registered nor voted in my lifetime.I've never seen the reason why. The usual gang of con artists will be voted in anyway so why bother. Kenyans have not reached a stage whereby they can differentiate between good over evil. And as long as our politics remain inclined on ethnicity, a lot more citizens will shy away from registration centers and life goes on....Peri

Interesting. But where would Kenya be and what would be the fate of Kenyans, if everybody is to reason this way? To earn the right to criticise the 'hopeless' political process, one ought to be in the habit of getting their hands dirty in trying to better the situation, by discharging their civic responsibility of electing the country's leadership, good or otherwise.

The anonymous MR. Albert should not amuse you at all. There are many out there who are not interested in voting entirely. But my observation leads me to this recommendation which is simple and clear: We need to just get rid of the common figures who are viciously hungry for power as from their fore fathers and have a fresh blood as it is always said.