CUTTING EDGE AND COMING OF AGE IN LIVE NEWS BROADCASTS

It can now safely be said that Kenyan news broadcasting standards have crossed the line between technically deplorable and professionally adorable. After many years of being unable to have more than two external live video sources on air, one local station has finally cracked it. 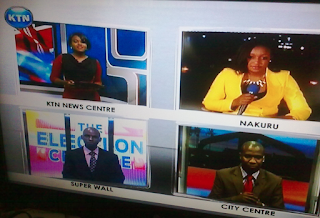 And what a beauty it was, to watch the four-way split screen. It's a refreshingly different delivery, and a far higher notch in the local broadcasting scene.

But, without wishing to blow the channel's bubble too soon, there's an uncanny resemblance between the above scenario and the one below! 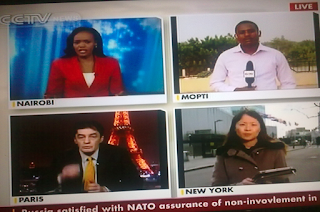 And that is undoubtedly the benefit of adopting global best practises, to liven up and raise local broadcasting standards.

Here, it is more of skills and technology transfer, rather than pure aping of the broadcasting style of a foreign TV station, for those who get my drift.
Posted by Albert Gachiri at 16:00