And so it came to pass that Kenya got to witness its first ever live presidential debate. The combined resources of local media houses helped to achieve this milestone. And the moderators also came from media circles. How the two performed didn't escape the public's notice. 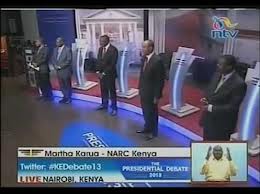 Call it unfair or even unwarranted, but it appears there was an element of dissatisfaction with one of the moderators, at least going by what has been posted in social media platforms.

Such is the very critical eye of the audience that perceived differences between the moderators, whether huge or mundane, will be mercilessly pointed out.

But thankfully, that is one thing anybody in the business will be made aware of, 'hours' after their journalism debut, and hence should be able to quickly identify suitable coping mechanism, to remain focused professionally.

The following is a sample of what the audience thought about the two moderators of Kenya's inaugural presidential debate.