It takes great courage for one to admit one's mistakes. And mistakes abound in the media industry world over. That's why it's admirable for one newspaper to encourage its readers to point out its editorial mishaps. This, can be an effective pre-emptive strategy-cum-apology. 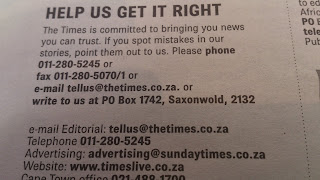 The South African daily fully acknowledges that despite it's best efforts, it's potentially susceptible to errors, human, mechanical, technologically, or otherwise.

A similarly gesture, I think, would be highly recommendable for the Kenyan press, which on a good, (or is it bad?) day, can be riddled with all manner of mistakes and the not so uncommon retractions.

This should not be interpreted as an admission of editorial incompetence, but rather, a noble realization of the reader's capacity to notice inaccuracies and ultimately improve the publication.
Posted by Albert Gachiri at 18:01

Email ThisBlogThis!Share to TwitterShare to FacebookShare to Pinterest
Labels: The Times South Africa