In a move that has largely been welcomed, one Kenyan TV station has taken a decisive step of exposing traffic offenders. But does it just begin and end with shaming and naming the road hogs? Doesn't this steer the initiative into hogwash territory? 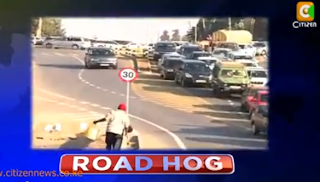 There's no doubt the road carnage in the country is a serious concern and acting before accidents happen is a big plus. However, in my not so perfect understanding, more needs to be done, to ensure there's sanity on Kenyan roads.

For starters, as has been pointed out in other fora, the viewers need to see more concerted efforts to co-opt the authorities in nabbing the 'alleged' offenders and ensuring they either have their day in court or even having instant fines imposed on them.

Failure to deliver this 'vital' addition reduces the value of this noble media venture into a 'fleeting shock therapy' session, if not merely propping up its 'pseudo-entertainment' elements.

After all, for how long have we encountered shenanigans on our roads, opting to only silently or animatedly direct morbid curses towards the road hogs, even when such irksome actions have resulted in the loss of lives?

There's also the elusive sustainability factor to consider. Many are the times big projects are launched by local media outlets, with elevated exuberance, only for them to soon start fading, before they eventually fold, after running out of steam. 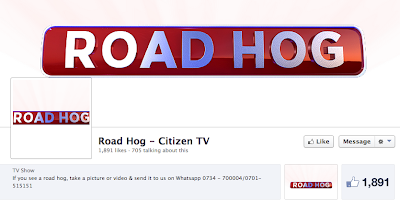 I like the idea though, of inviting members of the public to send in pictures or video clips of 'unroadworthy drivers' causing mayhem on the roads.

The crowd-sourcing platform not only facilitates the acquisition of more relevant content, but it also invites the public to actively participate and possibly co-own the initiative.

So, the belaboured point here, is the need to have some follow-ups, after the exposes.

@ma3route and @overlapke have been documenting 'road hogs' for while now, by collecting info shared by other disgusted road users

I kind of got the feeling this was not an entirely new idea, and you have just confirmed my suspicions. The more the merrier I guess, because this widens the dragnet and hopefully, more road hogs will be netted.