UNPACKAGING THE FRAUD AND FATE OF KETHI

The wave of popularity that had swept lawyer Kethi Kilonzo from a stellar performance at Kenya's Supreme Court, spat her on the cruel shores of politics. And here, her attempts to play dirty became her Waterloo. The media now has to play a key role in unpackaging this fraud. 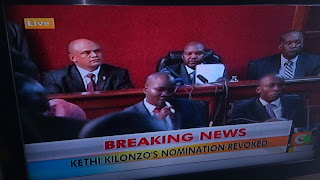 The news elements of this closely followed story, should not solely be about the verdict that discredited Kethi's eligibility to contest for the senatorial seat, formerly held by her late father.

There are various factors that could suitably answer the 'So What' question, which the Kenyan media, I hope, will dedicate a fair amount of coverage, to fully bring to light all the implications of Kethi's fiasco.

Big clues can already be mined from social media reactions, as sampled below.

The Book of Mathew 7:21 teaches us to “do unto others as you would others do unto you”. That’s not idle moral, or religious, advice. It’s an ageless nugget of wisdom common to most cultures. It’s a central civilisational rule. It teaches that “civility” is the pivot of all human relationships.