THE DEARTH OF PURE RADIO JOURNALISM

Don't worry so much if your husband goes astray. You're the Mercedes Benz, and the mistress is an inferior ride. So let the man have his way, because he will still come back to you. That is what was spewing out of a Nairobi-based FM station. When will radio presenters realise they also operate in the realm of radio journalism? 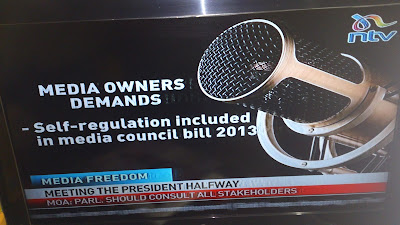 The captains of the local media industry are on record acknowledging the need to equip every radio person behind a microphone linked to an audience, with media ethics and basic journalism principles.

If that is achieved, then the case for self-regulation for the media will be cemented even further. But to continue having 'rogue' musicians, comedians, DJs and 'sales people' on air, will sustain the negative perceptions about the media industry.

Granted, the great revenue generation speared-headed by the radio 'sales people' on air, is crucial in keeping radio stations afloat. But at what or whose expense, should also be taken into consideration.

Somebody needs to keep track of what is acceptable ethical standards, and especially ensure the media, does not lead astray young people with impressionable minds.

That's why everybody is in agreement about the need for media regulation. How that is to be realised is the bone of contention.

But if nobody cares about what is in the best interest of the public, because the focus is on profits, then the media will eventually degenerate into a destructive force upon the very society it's meant to serve.

Hi Albo
As someone who works in the controversial tobacco industry I'd say there's a market for these products (and radio production). Otherwise they'd not exist.

If you look at someone lighting up and ask youself "why is this idiot killing himself and others around him?" I think along the same lines when someo tunes to these stations.
I guess the question is, is there someone out there who's making money out of sensible radio? Is it possible in our society to be profitable from responsible productions?

I see your point. However, the mass media should't operate only on the level of making money. There's a higher and greater good that should transcend commercial interests. And that is public interest, not what interests the public.