Cartoons found in the editorial page of a newspaper usually make useful commentary on social, economic or political issues. They are loaded with humour and satire, which undoubtedly offer lessons that linger after the laughter. But this is not to say they have an express licence to be licentious. The point need not be blunted by pointless voyeurism. 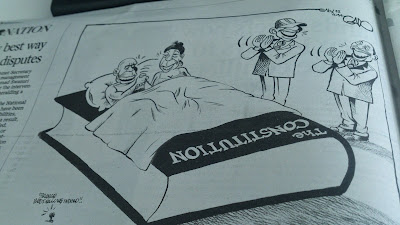 The above illustration, though probably making a poignant point, appears to have gone overboard as far as common decency standards are concerned, especially given that it was published in a national paper that purports to uphold family values.

Moreover, the artist, it seems, might inadvertently invite unwarranted introspection of the morals of the depicted characters, because parallels can be drawn between real life personalities and the context of the illustration.

Whether this can precipitate a lawsuit is very much debatable but what should not be objectionable is how dangerously close the cartoon is to descending into decadence.

The same message that the 'offending' editorial cartoon is trying to make, has been cautiously delivered in a rival paper, (very remarkably on the same day). 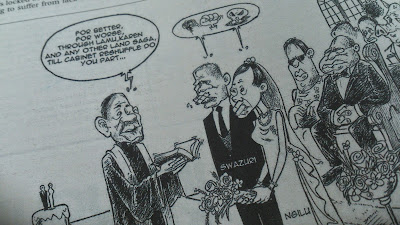 The setting is at the 'pre-honeymoon stage', which is much bearable than a 'post-coital' scenario.

Still, legal minds can help to evaluate whether this in injurious to the reputation of certain people within the Kenyan society. 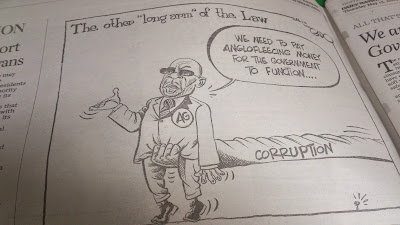 It does take guts and other associated circular appendages from the human anatomy, to boldly publish evocative and provocative editorial cartoons, but not everyone in the intended audience will be having a ball, (oops!)